Do not show again [X]
By Steven Cutler   2011 November Management 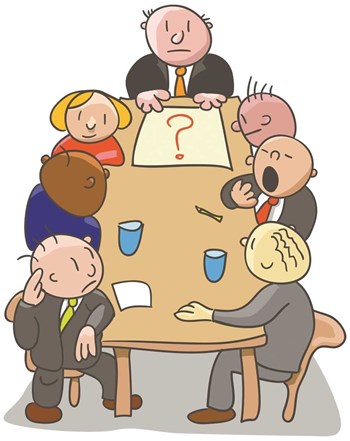 Managing a cooperative or condominium apartment building in New York would be a piece of cake… if weren’t for all those people.

An experienced managing agent taking command of an established co-op or condo building can usually sense that a board is dysfunctional the first time they attend a board meeting. “It’s instinctual,” says Russell. “Every hair on the back of your neck will stand up.”

A board clearly has problems, observes real estate attorney Phyllis Weisberg of Manhattan-based Kurzman Karelsen & Frank LLP, “when they can’t get anything done, they scream and holler, or it’s clear that there are factions on the board and they can’t make decisions.”

Really, it doesn’t take much to derail a board meeting. “I’ve seen boards where one or two people demand that all you talk about is their pet issue,” says Weisberg. “They will talk over anybody else and force you to revisit issues that have already been solved. It can make the business of the board grind to a halt.”

Red flags indicating there is trouble ahead for a new manager, according to Wayde Scheffer, president of Flemington, New Jersey-based Access Property Management, include “meetings where there is no structure, the board president seems to have no control and there is no protocol established—no agenda.”

Scheffer says that the board—and by extension the manager—are in dire straits “If they constantly avoid or don’t even identify issues; if they have losses year after year, yet aren’t funding their reserves, or doing it the federal government way—paying for it later without doing special assessments when there is a major issue.”

One more bad sign is very high board turnover. “We have one association that has had three or four boards in the last 18 months,” says Scheffer. “If somebody comes in and yells at them, they’ll quit.”

A Breath of Fresh Air

There is a bit of good news for a manager walking into a building whose board is a mess. In most cases the members are receptive to new management. They know they need a fixer.

“Normally the residents of the building and the board welcome me and the company with open arms,” says Don Skupinsky, a manager of several buildings run by Orsid Realty. “They are looking for a breath of fresh air. They want the building to be made whole again.”

According to Dan Wurtzel, president of Manhattan-based Cooper Square Realty, “Boards are starving for management companies to understand what their issues are. Sometimes the cause of the dysfunctionality is that the board really doesn’t understand their problems. They haven’t defined them properly so that they can break them down and deal with them.”

Indeed, in their hunger for remedy a stricken board can overwhelm a new manager with their list of ailments. “One of the common things we run across is a board giving us a seven-page list of 50 items they want to accomplish,” says Wurtzel. “Now.”

The first step, he advises, is to work with the board to prioritize—address and complete the first five items and then move down the list. “If you work on all 50 items at once, you’re going to get none of them done,” says Wurtzel. “But if you chop it down and start prioritizing, you have a better chance of making some headway.”

When Weisberg is called in to help get cooperative or condominium boards on track, she says, “I talk to them about adopting a code of ethics for board members—essentially a summary of the obligations of a board member. Then you have a conversation about mutual respect—get them to listen to one another.”

According to Jeff Heidings, president of Siren Management Corporation in Manhattan, “You have to train your boards—teach them the responsibilities of managing a business, setting policies that are proper for the building and not self-interest. It’s not about them, it’s about the building at large.”

Sometimes the tendency toward self interest presents itself in subtle ways. Heidings recalls the case of a shareholder who wanted to buy the apartment above him to create a duplex and came to the board to ask if they would approve his alteration application before he went into contract to make sure the combination was feasible and the investment sound.

It is tempting, says Heidings, to say, ‘“we should try to do as much as we can for him. It’s in the interest of everyone.’ But it’s not. There is a standard operating procedure in co-ops: first you underwrite somebody to buy an apartment, then you receive their alteration application and review that.”

A member of the board owning several apartments in the building lobbied to bend the protocol. “This person really had a conflict of interest,” recalls Heidings. One day he might be offered a nice price for an apartment that likewise could be combined into a duplex, contingent on an assurance the building would pre-approve the combination. “They shouldn’t be allowed to push that agenda,” says Heidings. “But they do. Because they care about themselves.”

Here again, a responsible manager would, if need be, says Heidings, “pound them into submission based on what is good for the building at large.”

Focus on the Problem at Hand

Gail Badger-Morgan, senior vice president of Marion Scott Real Estate, manager of Co-op City in the Bronx, said to be the largest cooperative in the world, recommends managers help their boards move their meetings along by constantly bringing their attention back to the items in the agenda. “Focus on the boiler that needs to be fixed,” she says. “Focus on the fact that we have to do something about the windows that are broken. Always get them to try to focus on the problem at hand, and if they want to fight and argue, fight and argue after the meeting is over.”

One way to ensure the meeting stays on track is to produce a clear agenda beforehand and send it to board members, along with any relevant documents, in advance of the meeting for review. During the meeting the agenda serves as a point-by-point task list. Once the meeting is rolling, observes Wurtzel, “if they get stuck on a particular issue or go off on a tangent, the managing agent must work to get them back on track. Otherwise you’re in for a very long ride.”

He offers a nifty tool: “Tell a board member, ‘hold that thought,’” then refocus the group on running through the agenda. “If somebody wants to hijack the meeting and they’re really good at doing that,” advises Wurtzel, “the board president should bring everything back in line. But if it’s out of control, you adjourn the meeting. Try to do it off-line.”

It can be particularly difficult disciplining a board in a building whose sponsor still has a large stake, observes Heidings. “If the board says, ‘we hate the sponsor, he’s been pushing us around, bury him!’—that’s a distressful situation. You have to say to them, ‘the sponsor is your biggest shareholder and he can help you or hurt you to a great degree. It’s always best to come to terms that work best for you and for the sponsor.”

Board members are often concerned that the sponsor is running the building like a rental. “They tell the manager,” says Heidings, “‘we want you to come in and force our sponsor to sell. But that’s not something a managing agent can do. It’s a legal issue.” The best he can do, he insists, is, “try to be persuasive and understanding and kind and set a nice course with a sponsor—try to reason with him. If the sponsor says ‘no, go to hell, I’m not going to do it’ ”—end of story.

Challenging as it is to discipline a dysfunctional board, notes Scheffer, “an inexperienced manager might be more inclined to try to keep the peace rather than doing what’s right—to placate an individual rather than hit the issues head on. But it serves the client better to not walk away, saying, ‘it’s up to you.’ It’s more important to just keep steadfastly pushing the practical, pragmatic, realistic solutions onto the board.”

Having a roster of trusted consultants at the ready helps a management company maintain a solid, authoritative footing in dealing with a board. “I’ve learned to develop professional support around me,” says Scheffer, “with attorneys, auditors, engineers, to make sure that we all collectively look at the same situation and present a plan collectively to the board.”

Management, however, cautions Skupinsky, “should never make a decision without the board’s input. The board has been elected by the building to represent them.” The managing agent’s job, he adds, is to “provide information and suggestions based on the fact that this is what we do. We’ve been down this road many times before.” It is to enable the board to make the most informed and intelligent decisions to foster the health and well being of the corporation, which happens to be a residential community.

To maintain the correct attitude vis-a-vis the board, and the entire community for that matter, Badger-Morgan reminds managers to keep in mind that although they run the building, “these people live here. So no matter what you do, you are still the visitor.”