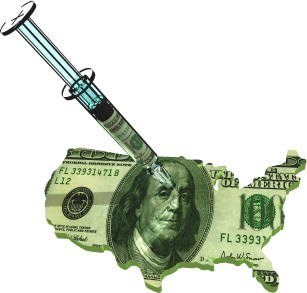 Fresh from hoisting up the banking and automobile sectors, a newly muscular Uncle Sam is now turning his attention to putting the skids on the real estate meltdown.

The stimulus portion awards an $8,000 tax credit to first-time homebuyers, aimed at creating demand that will stabilize the housing market. The bailout portion allows some homeowners with mortgages the option of either refinancing at a much better interest rate, or having their mortgage payment modified down to 31 percent of their gross income.

While the housing initiatives are helping to thaw the chilly real estate market nationwide, their effect on properties in the Big Apple may not be so clear. As with many government programs, these rolled out of Washington in a one-size-fits-all mode. Unfortunately, their limited eligibility requirements make them a tight fit—or no fit for at all—depending on how much money you make, or where you live in New York City.

The home must be a primary residence, be located in the U.S., and can’t be a inheritance, gift or sale from a “related person.” The credit also limited to $8,000 or 10 percent of the home’s purchase price, whichever is less. For example, a house purchased for $65,000 would only generate a $6,500 credit.

For 2009 homebuyers, the credit is much more valuable than a mere tax deduction. Unlike a deduction, a credit reduces federal tax liability at a 100 percent rate and will return cold, hard cash to anyone owing less than $8,000.

For example, a taxpayer who owed $4,000 in federal taxes and qualified for the credit would get a check from Uncle Sam for $4,000; a taxpayer who owed nothing and qualified would get a check for $8,000. Additionally for those purchasing in 2009, the credit can be claimed on either their 2008 or 2009 tax return, depending on which is more advantages to the filer. Those who bought a house in 2009 but filed their 2008 return without the credit, can file an amended 2008 return (Form 1040X), using form 5405 and get a refund check within a matter of weeks or months, says IRS spokesperson Kevin McKeon. “You get the money right now instead of waiting until next January.”

McKeon foresees new buyers using cash from the credit to either furnish their new home or replenish bank accounts depleted from the down payment.

The credit is getting a mixed response around New York, primarily dependent on the borough. In Manhattan, the tax credit’s income limit of $75,000 for individuals and $150,000 for couples makes it a non-starter for most clients, says Cayle White, a sales associate at Bellmarc Realty’s East Side office. “When we go through the rules, the average income level in the city exceeds the salary cap,” says White. “Most people earn more money than that, especially as a couple.”

Limiting the tax credit’s usability even more, says White, are most co-op admission rules, which require that successful applicants must “earn more money than that.”

Ellen Simon, a senior associate with Bellmarc, who covers Manhattan and parts of Brooklyn, says some of her buyers are able to squeeze under the income requirement because they’re just starting careers or have financial backing. These first-time buyers are typically looking for $600,000 studios or one-bedrooms in less expensive areas in Manhattan, south of 96th Street, she says.

“One person in particular I’m working with has family money and doesn’t have a great job. He’s looking and saying, ‘Yeah, I wouldn’t mind that eight thousand dollars,’” says Simon.

In down-market Staten Island, potential buyers are having no problems with the tax credit’s income limits, says John Vernazza, president of the Staten Island Board of Realtors.

For example, says Vernazza, a two-bedroom garden-style 1,000-square-foot condo on Staten Island can be purchased for $300,000—a bargain, he says, for someone who works in Manhattan and is willing to commute using readily available public transportation.

Vernazza is “cautiously optimistic” that the real estate market in his borough has reached its bottom and that potential buyers will move from testing the waters to making the plunge.

The second major initiative of the Obama Administration is the Making Home Affordable Program.

A joint effort between the U.S. Department of the Treasury and Department of Housing and Urban Development (HUD), the program will offer help to homeowners struggling to meet their mortgage payments or in danger of default. The seven to nine million homeowners who are expected to qualify nationwide will be offered help refinancing or modifying their first mortgages.

The refinance option is aimed at homeowners who are current on their mortgage but can’t take advantage of recent lower mortgage rates because of tightening lending standards or because their homes have decreased in value.

For homeowners to be eligible, the mortgage must be owned or guaranteed by Fannie Mae or Freddie Mac and it must not exceed 105 percent of the property’s current value. Those who will benefit from the program include many who were able to obtain loans under the subprime “almost anything goes” rules, but who are now shut out because of tightened loan requirements.

“Generally, they’re [banks] going back to the strict standards of more than 10 years ago,” says Sharon Price, director of policy at the National Housing Conference, a non-profit that promotes affordable housing policies. Among those who bought homes recently but now can’t get refinancing, says Price, are the self-employed, anyone with a credit score below 700 or homeowners who have adjustable rate mortgages (ARMs) that are resetting to much higher rates.

Many others, Price says, are shut out of refinancing because they’re “under water” with their mortgage—meaning that they owe more than their co-op or condo is worth due to decreasing property values.

The program will be able to help those under water, but only to a certain degree, as eligibility requirements call for the condo to be assessed at a loan-to-value ratio of between 80 and 105 percent of what they owe, says Price. “If somebody’s really under water, they’re not going to be able to be helped by the program. I think they (HUD) needed to make the parameters narrow enough that they felt like they weren’t helping anyone who may have taken out more home than they could truly afford. So it seems like they picked a rather narrow window.”

Those looking to find out if they’re eligible for refinancing though the program can contact Fannie Mae or Freddie Mac directly, or go to the MakingHomeAffordable.gov website and use its “Loan Look up Tool,” in the section of the same name.

Loan Payments at 31% of Income

The loan modification option of the Making Home Affordable program is the most aggressive of the new initiatives and it’s aimed at homeowners who have missed mortgage payments and are in danger of foreclosure on their first mortgage.

If they qualify for the initiative, homeowners can have their mortgage monthly payments reduced to 31 percent of their gross monthly income. (To accomplish the reduction, the loan can be extended to 40 years, the percentage rate reduced to as low as two percent for five years, or a portion of the loan may be deferred, or even forgiven.)

Those who qualify for the loan modification must be the owner/occupant of their condo or co-cop, have an unpaid balance of less than $729,750, have the loan originating before January 1, 2009 and must be at risks of imminent default because of significant changes in their income or expenses.

The modification program is of limited value to co-op or condo owners in many New York boroughs, because of the $729,750 ceiling on mortgages.

In Manhattan, the high prices of most condos or co-ops mean that most owners will not be even remotely eligible for participation. Outside of Manhattan, it’s expected that many more will qualify, depending on their remaining mortgage balance. Despite the limitations of the loan modification, a fair number of New Yorkers will still be able to take advantage of the program, especially those struggling with their mortgages due to changes endemic to today’s economy.

“Sometimes people are losing second jobs, or they’ve been cut back on their overtime. A source of income that they’re depending on to pay their monthly mortgage payment has been reduced,” says HUD spokesperson Brian Sullivan.

Another limitation of the program is that it’s voluntary on the part of loan providers, and not all loan providers have signed on yet.

A partial list of loan providers participating as of mid-April included GMAC Mortgage, Chase Financial, CitiMortgage and Wells Fargo Bank. Homeowners who want to find out if their loan provider is participating can log unto www.MakingHomeAffordable.gov and check the list there (which may not be complete), or calling the number listed on their mortgage payment.

“We encourage our customers, at the first sign they’re having any trouble paying their mortgage, they should contact their lender immediately,” says Fusco, who notes loan modification applications to his business are reviewed and approved within seven to 60 days.

HUD’s Brian Sullivan says that homeowners struggling with mortgage payments need to go against their tendency to isolate themselves.

“You can’t imagine the people who feel a tremendous shame with the prospect of losing their home, so they don’t open their mail, they don’t make the phone call and things go from bad to worse, so there’s no avoiding the inevitable. So the best thing to do is confront this head on and speak to your loan service, your loan lender, and ask for the loss mitigation department,” he says.

Sullivan says that homeowners in trouble also need to be aware of various scam artists promising to save their homes, for a fee. “There’s an explosion of these pay-to-play operations—some of them are legitimate, some of them are going so far as to misrepresent themselves as government agencies, some of them are guaranteeing to modify the homeowner’s mortgage. Nobody can guarantee that except for your own lender.”

Sullivan says a distressed homeowner’s best counseling is a HUD-approved agency, available at no cost and listed by state and city on the MakingHomeAffordale.gov website. “The HUD-approved housing community, supported by HUD, will not charge anybody.”

And in today’s tough environment, homeowners and the housing sector can use all the help they can get.