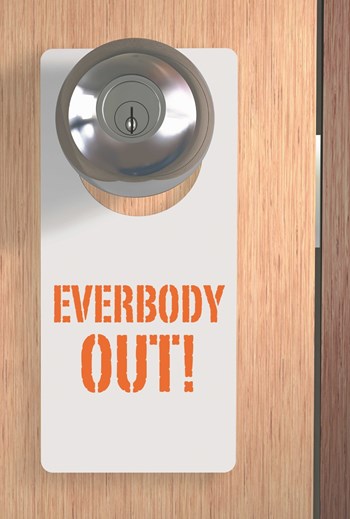 One of the most important recurring themes Cooperator readers are likely to encounter in these pages is that of communication; between board and manager, between building administrators and residents, and between neighbors. When communication breaks down, or administrators discard transparency, building operations and community morale tend to suffer.

That being said, there are times when information can and should be more tightly controlled, and when non-board shareholders actually don't have the legal right to certain information. Knowing when to include and when to exclude residents from the decision-making process and what kinds of information they have the right to access is an important part of any board's responsibility, and can help avoid unnecessary (and expensive) legal issues.

One of the most common complaints reported by shareholders and unit owners in co-op and condo buildings is that their boards and/or managers keep them in the dark—not alerting them to upcoming work in the building, failing to respond to questions and complaints, and not holding regular meetings.

Board members, by contrast, may feel that as unpaid volunteers, they aren't necessarily obligated to respond personally to every email they get, or issue a press release every time the lobby gets painted. Additionally, shareholders may not be aware that there are sensitive matters discussed in board meetings that must be kept confidential.

According to Michael Donuk, director of management for Argo Real Estate, LLC, in Manhattan, "Generally, building boards will meet once a month. Sometimes [meeting requirements] are spelled out in the condo or co-op documents; usually the bylaws. Some boards meet less often because they're smaller and don't have as much business going on. But the general practice is about once a month."

In the case of co-ops, adds Wendell A. Smith of Greenbaum Rowe Smith & Davis LLP in Iselin, New Jersey, "[Executive sessions] are like workshop sessions. They basically promote dialog among the board members. After the workshop session, they usually try to get a consensus as to whether they're going to move forward—but they don't vote on it until they go to open session. Some boards hold [a closed meeting] immediately prior to the open meeting. Others will hold it a week or two. It depends, but there's nothing legally mandated."

The vast majority of bylaws for both condominiums and co-ops do not mention anything at all about executive session," says Steven Troup, a partner with the Manhattan-based law firm of Tarter Krinsky & Drogin LLP. "But the New York State Sunshine Meetings law says if public meetings should be open to the public, public body meetings should be open to the public, so some co-op and condo boards will open a portion of their meetings to unit owners."

Among those that do, the degree of openness during these meetings vary from building to building as well, says Donuk. "Some buildings do allow the owners to attend the first part of the meetings as long as they're advised in advance," says Donuk. "And some boards have closed meetings and answer any questions that owners may have separately outside of the meeting. It all depends on how the board wants to operate."

Those policies have both positive and less-positive implications for the building and board, depending on who you ask. According to Greg Carlson of Carlson Realty, Inc., in Queens and the executive director of the Federation of New York Housing Cooperatives and Condominiums (FNYHC), "If the building maintains a policy of openness, and the board is meeting on a monthly basis, the benefit is that there's no pent-up aggravation among shareholders who feel they're not being heard."

Helene Hartig, a Manhattan-based attorney who represents co-ops and condos and is a board member herself agrees, and feels that an open meeting policy engages shareholders to become more involved in the governance of their building community. "Another benefit is that if board members know that the decisions they're making are likely to be reviewed by other people, they're apt to be more careful," she says.

Despite the appeal that an open-door, all-on-the-table policy may hold for shareholders and unit owners, openness is not the norm for the majority of the city's co-op and condo buildings. Carlson believes that conservatively, only about 15 to 20 percent hold open meetings.

That's not necessarily a bad thing, says Hartig. In addition to the problem of sensitive information being inadvertently discussed, she believes that "When everyone has a role in the decision-making process, it's very difficult. Too many cooks can ruin the soup."

"I've seen grandstanding at open meetings where board members play to the public, and you don't have a full, honest, open discussion," adds Carlson. "If there's too much politics going on, you're not really getting how that board member is really thinking. Even if it's just a few other members at an open meeting, those members are going to go out and talk to their neighbors, and that puts pressure on the board. That becomes harder to control in open meetings."

Not only that, but opening the floor to any and all comers can have the opposite of the desired effect: faced with all their neighbors and peers, shareholders may be afraid to express their thoughts or grievances for fear of conflict or disagreement.

According to Hartig, buildings must weigh the benefits and drawbacks of inviting everyone to participate in meetings and decide what approach fits their community best. The practice of holding closed board meetings, she says, is set forth in the bylaws or internal rules of individual buildings—not in state law. Board members are fiduciaries who have to operate with the best interest of the co-op or condo first.

Regardless of whether a board opts—as most do—to keep its decision-making process private or make it public, legal and management experts agree that there are some topics that simply are not the business of the general population.

"We do try to keep most things public," says one Manhattan board president, "except for when the discussion concerns an individual residents' personal issues—like problems with making maintenance payments, for example. Then we call a private executive session." Most experts agree that the names of people in arrears should be kept private so as not to air their private issues and possibly risk legal action.

Maintaining shareholders' privacy isn't the only reason boards cite for keeping meetings off-limits to non-board residents. Hartig gives the potential for exposure to liability as another big reason to hold closed board meetings. Board members that discuss sensitive topics and perhaps, get sued, are protected by directors and officers insurance. However, non-board shareholders are not covered by insurance and that could lead to serious liability issues, she says.

Carlson agrees that non-board members sitting in on sensitive board discussions are not themselves covered by a building's D&O policy, but points out that they shouldn't be voting or contributing to any decisions that are being made in the first place.

Approval and/or rejection of prospective buyers, and issues to do with contracts are another subject that most experts believe should be handled in a closed session. For example, if three vendors are bidding on a contract, a board member is bound by confidentiality. However, if a non-board member is at a meeting where this is being discussed, he or she could theoretically tell one of the vendors how much the other one is bidding—and that's just bad business.

Open or closed, there are plenty of ways for shareholders to be involved with and stay abreast of what's going on in the boardroom. Boards can hold an open session beforehand to allow residents to raise issues and voice their views on building business. Input from non-board shareholders can solicited in other ways too—by inviting them to join committees, for example, or by surveys, “town meetings,” and even the old-fashioned suggestion box in the lobby.

That hybrid approach may offer a workable compromise between open and closed meetings. "I've been on boards that hold open board meetings," says Carlson, "and then go into executive session to discuss certain items. But before they do that, they may hold a short ‘question-and-answer’ period for the other shareholders to bring up issues."

"I was the board president of a small co-op where I used to live," says Troup, "and we permitted [non-board residents] the first 15 minutes of almost every meeting to come and ask questions. We'd answer them and then announce that we had to go into executive session. Nobody ever gave us an issue over it. But like I say, that's the exception to the rule. Most co-op and condo boards don't allow that."

Distributing minutes to residents is another way to keep them in the loop, although there are some co-ops that opt to keep them private as well. In many buildings, residents interested in seeing meeting minutes must request them from the management office, while in others the minutes—or at least a synopsis of them—are regularly distributed under residents' doors, posted on the wall in a community room, or more commonly nowadays, by e-mail.

“There's no requirement to keep minutes,“ notes Troup. “They have to be taken at an open meeting but statute does not require that minutes be taken at a closed session. A lot of boards do keep minutes of closed sessions, but they would not be available to owners because those would be privileged communications among the board members.“

Along with those methods of communication are shareholder's meetings, which building bylaws almost universally require to be held annually. The more residents show up to observe and actively participate in these meetings, the better. To get people in, some buildings resort to incentives like holding raffles, or giving away theater tickets or restaurant discounts.

To sum up, different co-ops deal with the issue of disclosure and confidentiality in different ways. As president of her 56-unit co-op, Hartig likes to hold an open board meeting every two or three months, and makes board members' e-mail addresses available to all of the shareholders. While other board presidents prefer a more closed approach.

But whatever method, board members should remember that they must act in the best interests of their community and follow the rules and regulations of both the board and state, local and federal law.