If you’re interested in lowering the energy bills of your condo or co-op building, all you have to do is see the light-energy-efficient light, that is.

In these days where many people want to conserve energy, and just about everyone is anxious to shave some dollars from his or her monthly bills, energy-efficient lighting is becoming a popular option for condo and co-op buildings.

It is usually the dollars that can be saved that draw managers and boards to investigate conservation and energy-efficient lighting. But by making some up-front investments, buildings may very well end up saving a good amount of money while at the same time conserving energy.

“Typically it’s saving money they’re interested in,” says Max Hoover, president of Goodmart Lighting and Electrical Supply in Brooklyn. “Sometimes there’s no-brainer stuff they can do that doesn’t cost anything, like turning off the lights. But all you need is one guy on the floor who leaves the lights on, and you’re wasting money.”

You know those long fluorescent bulbs that very often buzz, especially when they start to run out of power? Well they’ve been around since the 1960s, and over the years new and improved bulbs have been invented that provide as much light while cutting down on energy costs.

The old style of lights are T-12 fluorescent bulbs that use a magnetic ballast. The new style is a T-8 bulb. It uses an electronic ballast instead of a magnetic one and uses less energy.

“The old style . . . has a big core and coil, and it can hum or buzz, it generates a lot of heat and basically wastes a lot of energy,” Hoover says. “The newer ones use electronics instead of having a magnetic core and coil. They don’t generate as much as heat, don’t make that [buzzing] noise, and the bulbs don’t flicker. The new stuff doesn’t do any of that, and as a result they’re much more energy efficient. They waste less energy in translating the wall currents to the light.”

“Fixtures should all be energy efficient,” says Shellie Levine of Bulbtronics in Farmingdale. “A lot of these buildings, if they’re older, use T-12 bulbs. They should switch to T-8. If you have a two-light, four-foot fixture, it would be 86 watts with a T-12. If you went with a four-foot T-8 fixture, you would have 60-watt [bulbs] and have quite a bit more light.”

Levine says T-12 watts originally used 40 watts, then, when people wanted to be energy efficient, bulbs were changed to be 34 watts. “But you lost light,” she says. “With the T-8 bulb, it’s only 32 watts, but because it works with an electronic ballast, you gain light. So it’s well worth it.”

Using this technology does mean changing the lighting system’s bulbs and ballasts of every fluorescent fixture in the building, but Hoover says switching isn’t all that complicated. It can be done by any electrician, who would cut off the power, open up the fixture and change the ballast and the bulbs. The new ballast would be the same length as the old one, and the new bulbs are the same length as the old ones so they would snap into the same sockets.

“It’s pretty straightforward,” Hoover says. “The term for changing out the old bulbs and the old ballasts and putting in new bulbs and ballasts is called a lighting retrofit.” There is an up-front investment attached to this process, but according to Hoover, you can expect to see a return on the investment within two to three years.

Even easier is changing standard lights with compact fluorescent lights in areas like lobbies and hallways. They’re available in various sizes and typically use about one-fourth of the energy incandescent lights use.

“There are all kinds of compact fluorescent bulbs on the market that you can change from your incandescent bulbs,” Levine says. “You can go from a 60-watt to a 15-watt. Then the bulbs don’t have to be changed as often.”

All in the Timing

Just about every building has a few rooms where the lights are always on, even when no one is in the room. Laundry rooms and garbage areas are common places where this happens for no other reason than people stay in the rooms for brief periods of time and don’t shut the lights off before exiting. Think of how little time people spend in a trash room (it’s not exactly a place you want to hang out) and then think about how the lights are on there non-stop.

There are measures that can be taken to reduce usage in these areas. Both Hoover and Levine suggest an occupancy sensor as an effective option for trash areas.

“We can put an occupancy sensor where the switch would be,” he says, “so that if someone opens the door, the light comes on, then after they leave, the light shuts off.”

Timers can also be used to reduce usage. Hoover recommends these as options for laundry rooms.

“Typically the lights have been on 24/7 in a laundry room,” Hoover says. “There’s a light switch, but it won’t get turned off. What we would suggest there is a timer instead of a light switch. You hit a button, lights come on for 30 minutes and then they shut off.”

Stairwells are another often-unoccupied area where wasted light is a constant, but they get a little tricky because there are codes requiring them to be lit in case of emergencies. Still, Hoover says stairwells are actually in use on average about two percent of the time, and there are ways to cut down on the cost of lighting stairwells.

One way is a motion-sensing dimming light fixture. According to Hoover, these sensors can turn off the lighting in stairwells when they’re unoccupied. If your building’s code doesn’t allow that, the sensor can dim the lights when the area is empty. Hoover adds that the sensors work so quickly that a person entering the stairwell wouldn’t know the lights were off just before he or she opened the door. It is, however, a sophisticated technology that will eventually pay itself off—but not as quickly as some of the other technologies.

“That one doesn’t quite have the same bang for the buck as a ballast-and-bulb change,” Hoover says, “because you’re talking about a new, one-piece sophisticated light fixture that can dim when no one’s around.”

Before making the decision to make the switch to energy-efficient lighting systems, a building should get some kind of study or estimate done in order to learn how much money it can save. Estimates shouldn’t cost anything, so it’s a good idea to talk to multiple companies—not only to get the best price for the job being done, but also to improve your chances of getting as accurate an estimate as possible in regards to what you’ll be saving.

“The energy audit all depends on the information someone gives me,” Levine says. “If I go to a building and they tell me certain lights are on 24 hours a day, and what the wattages are, each place is different, and according to what they tell me, I know what to tell them.”

Hoover pointed out a co-op where occupancy sensors were installed in the building’s 43 trash-compactor rooms. The job cost $2,500 -- $2,250 after a rebate from the New York State Energy Research and Development Authority (NYSERDA).

Goodmart then conducted a study to determine how much the building was paying to light the rooms and how much it could save. The company calculated how many fixtures were used to light these rooms, how much wattage per fixture was used, the kilowatt rate and how often the lights were used.

“The lights were on 24/7,” Hoover says. “With trash rooms, people are not only in there for brief periods of time, but there are just two periods of the day when most people throw out trash -- in the morning and after dinner. The rest of the time, most people are working. So that eight percent is conservative.”

In that same building, Goodmart installed motion-sensing light fixtures in the stairwells. Hoover says the job cost $17,500 after the rebate from NYSERDA, and that the annual savings was $4,000 per year.

OK, so this seems like a win-win. Make an investment that very likely will pay itself off in a few years, and you can ultimately save some money for your building while also doing your part to conserve energy. So why isn’t everyone signing up for new fixtures and ballasts?

Hoover says two things can make boards and managers turn a blind eye towards switching to an energy-efficient system. First, there is the matter of the investment. It can be difficult to sell residents on spending additional money up front, and the long-term financial benefits can be difficult for some to see beyond the initial investment.

The other problem can be the fact the new lighting itself isn’t something that brings a significant aesthetic change to a building.

“You get a lot of boards in the city that just aren’t interested in spending money on things that aren’t tangible,” Hoover says. “Changing the carpet in the common area, that they see. But a different light bulb? If we’ve done our job correctly, they’re not going to notice the difference in what they see with their eyes.”

But it’s something that should be worth looking into.

“Typically when you factor in hours of operation, the cost of the energy, which is the kilowatt rate, and how much energy is being used by the old stuff, and how much is being used by the new equipment to what the energy savings would be, and calculating how much it would change to do the retrofit, you’ll see about a two- to three-year return on your investment,” Hoover says. “It’s really a no-brainer.” 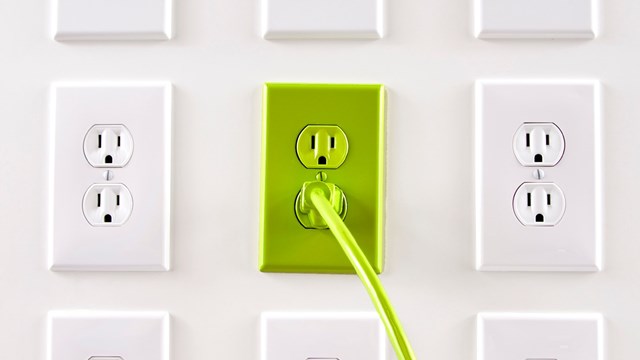 Getting Your Properties ‘Switched On’