Do not show again [X]
By Annette Hall   2010 May Neighborhoods 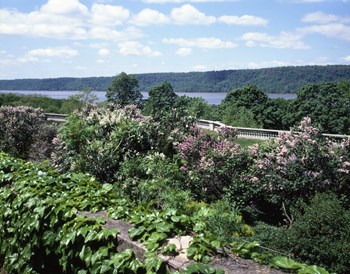 When people think of the Bronx, most probably picture an urban landscape of  tenements and commercial buildings surrounded by acres of concrete and asphalt—the image of a leafy suburban enclave is perhaps not the first thing that comes  to mind. That's one of the things that makes the neighborhood known as  Riverdale so special.

Bounded on the west by the Hudson River and on the north by the Westchester  County line, with borders extending south to 224th Street and east to Van  Cortlandt Park and the Henry Hudson Parkway, Riverdale's landscape is  characterized by winding streets, hilly terrain, and dramatic rocky  outcroppings along the river. A large portion of the neighborhood has been  designated a greenbelt, with open spaces, public facilities and outdoor  recreational opportunities, and the views of the high, rocky cliffs of the  Palisades and the Hudson River are magnificent.

Indeed, not much has changed in the landscape since The WPA Guide to New York  City, published in 1939, described Riverdale this way: "The homes are set along  rambling lanes; on the crests of hills overlooking the Hudson; atop ravines  that lead to the river; amid flower gardens and picturesque rock formations."

Thanks to strict zoning regulations, the neighborhood has more or less  maintained its look and character since the WPA Guide was published—but that's not to say the area hasn't borne witness to some interesting changes  over the years.

In 1786, farmer William Hadley bought the wooded hilly tract that is now  Riverdale as a homestead on which he intended to cultivate and raise livestock.  His near neighbor, Frederick Van Cortlandt, was successfully farming wheat. The  Van Cortlandt House, which was built in 1748, claims the title of the oldest  surviving residence in the Bronx, and is now a museum. George Washington made  it his headquarters several times during the Revolutionary War.

Though they struggled on their new land, the Hadley family did not succeed as  farmers, and eventually sold the land to Major Joseph Delafield in 1829.  Delafield had discovered the area as a member of the Army Corps of Engineers.  He was supervising the building of forts on Staten Island and Brooklyn, and he  needed a source of limestone. He found the source along what is now Palisades  Avenue in Riverdale.

Delafield built his own vacation place on the tract he purchased from the Hadley  family. Before the Civil War, Delafield started selling off portions of land to  well-heeled New Yorkers for summer homes away from the oppressive heat and  cholera epidemics of the crowded city, or as weekend retreats during the winter  months. Many of the homes—many of them mansions—remain, and some are open to the public as museums and historic properties. The  families who built in Riverdale during the Civil War era included the Colgates  of soap and toothpaste fame, the Dodges of the copper mining dynasty, and  famous actor Edwin Forrest, whose Fonthill Castle is now the administration  building for the College of Mount Saint Vincent. Some famous Bronxites are  actors Danny Aiello, Tony Curtis, and Hal Linden, actresses Anne Bancroft and  June Allyson, singers Jennifer Lopez and Billy Joel, designers Calvin Klein and  Ralph Lauren, and former New York City Mayor Fiorello LaGuardia.

At the turn of the 20th century, Riverdale was still primarily a bucolic summer  retreat with several dozen families living on large private properties  overlooking the Hudson River, but as rail commuting to Manhattan became easier,  Riverdale became ripe for the next wave of development. Charming, eclectic  single-family homes were built by the score in the 1920s. The influential  domestic architect of the time, Dwight James Baum (brother of Wizard of Oz  creator Frank) left his legacy with homes of Tudor, Cotswold Cottage, Georgian,  and Spanish Colonial design. When the Henry Hudson Bridge and Parkway were  built in 1936, more people sought the small town ambience just across the  Harlem River.

The post World War II building boom hit Riverdale with multi-family dwellings  and large apartment buildings, many of which eventually became co-ops. Most  Riverdalians then were young growing families whose breadwinners could easily  commute down into Manhattan to work, and after work retreat to one of the most  beautiful sections of New York City.

It's still a quick trip today. Transportation via the MTA's 1 and 9 subway  lines, express buses, and the Metro North Railroad can take a Riverdale  resident to the heart of Manhattan in about 20 to 40 minutes. By car, at the  right time of the day, the trip can be even less than that. It's also an easy  commute to northern New Jersey or Westchester as well.

While new residential construction is largely comprised of condos, co-ops tend  to predominate in Riverdale. On average, according to Barbara Jurist, an  associate broker with Sotheby's Real Estate in Riverdale and a resident of the  neighborhood for four decades, prices for one- and two-bedroom co-ops typically  linger in the mid six figures—quite a bit less than comparable Manhattan properties.

According to Kristen M. Hackett, vice president of Robert E. Hill, Inc., a  Riverdale-based realty firm, "There are fewer condos in Riverdale than co-ops.  Prices for condos are generally about 15 percent higher than co-ops. You will  see a wide range of prices in co-ops here depending on what part of the  neighborhood [they're in] and whether it is a prewar of post-war building. For  instance, a two-bedroom in a very nice Central Riverdale co-op with an elevator  but no doorman might run in the low $300,000s, but a two-bedroom in a  higher-end doorman building with a river view could be in the $500,000 range  and higher."

Linda Solomon, a broker with Halstead Property Riverdale LLC, adds that: "It  really does vary. Condos are kind of a new entity to Riverdale, and the new  developments are at much higher price points. I have a two-bedroom, two-bath  co-op with an open kitchen and dining area in a prewar building east of the  highway that's fully renovated, but not a doorman building. And we have it  listed for $389,000 with common charges of $477 per month. That's versus a  small three-bedroom condo in a brand new development where they have lowered  the [asking prices] to about $699,000 and up."

Desirable as Riverdale homes may be to many people, the recession did not spare  the area entirely. "Overall, we saw prices drop as much as 20 to 25 percent  last year for houses and co-ops," says Hackett. "We're seeing about a 10  percent recovery now from that low point, and we're seeing quite a bit of new  development here as well. The sales in these buildings have been slow, but they  are beginning to pick up in several of the buildings such as the Latitude and  Riverstone, just to name a couple. Some of the developers have decided to rent  as an alternative at this time."

Solomon agrees. "We made a lot of corrections," she says, "but things seem to  have settled. We're really trying to stay with the market. When you price it  right, it sells."

According to Hackett, "What attracts buyers to Riverdale for the most part is  the proximity to Manhattan but with an attractive price differential. [You get]  so much more apartment for your money here. Riverdale is also interesting. The  best way to describe it is urban-suburban. It has bucolic neighborhoods with  gorgeous trees—like the Fieldston Estate area west of the Parkway, North Riverdale, Spuyten  Duyvil and Central Riverdale—but it's only 15 or 20 minutes to midtown.

According to Solomon, a longtime Riverdalian herself, buyers are drawn to  Riverdale for a host of other reasons as well. "There are lots and lots of  parks. And safety. Easy access to Manhattan. It's 22 minutes from the Spuyten  Duyvil station to Grand Central on Metro North and a five-minute bus ride to  the #1 express buses. People want to get away from the noise, and they get it  here. It's quiet. I raised both my children here, so I'm living here 40 years.  My husband has a business down the street, so we're pretty ensconced in the  neighborhood. There's Wave Hill, which is fabulous—it has great programs for children and for adults—for anyone that wants nature and be close to the beautiful river views."

Robert Wachsman, a real estate broker with Riverdale Homes, LLC, says his family  moved to Riverdale in the 1960s from another part of the Bronx, and remembers  his mother telling of taking delightful family outings to the countryside of  Riverdale to picnic when she was a child. Riverdalians tend to stay in the  neighborhood—even staying within buildings for generations. The population—about 25,000—has been stable for the last few decades, with people who moved into a  one-bedroom 35 years ago moving to larger places with more bedrooms as their  families grew and then downsizing back to smaller spaces as the children grow  and leave.

In recent years, there has been an increase in singles moving into Riverdale and  many retirees as well are opting to stay rather than move to warmer climates.  The retirees that are exiting Manhattan and taking advantage of equity from  their homes, discover they can get more space for less money in Riverdale. Even  a number of out-of-staters are choosing to retire there. According to Jurist,  Riverdale almost has the feel of a quiet, friendly village, "but the  entertainment and excitement of Manhattan is just 20 easy minutes away."

Green Jewels in the Crown

Among Riverdale's most outstanding features are the area's parks and museums.  Wave Hill is a 28-acre park devoted to the connection between humans and  nature. Providing the neighborhood with an oasis of natural beauty and  serenity, it has internationally-acclaimed gardens, horticultural collections,  and two historical house museums. Wave Hill House, built in 1834 in the Greek  Revival style by noted lawyer William Lewis Morris, was enlarged in 1866 and  1890 by succeeding owners. Wave Hill House was host to many famous guests,  including Charles Darwin, Mark Twain, and Theodore Roosevelt. Also on the  property is Glyndor, built in the 1860s and a fine example of the Georgian  Revival style. Wave Hill is open year round and offers many different programs  about horticulture, as well as concerts in the summer.

The Judaica Museum of the Hebrew Home for the Aged features an extraordinary  collection of Jewish and Hebrew textiles, art objects, and paintings. The  museum is an educational resource with changing exhibits, and - like almost  every place in Riverdale—the grounds command impressive views of the Hudson River and the Palisades.

Outdoor activities abound as hiking trails and paths are numerous. The Riverdale  Ramble is an annual 10K race sponsored by the Van Cortlandt Track Club. The  race has been run for nearly 30 years, and is advertised as "running through  one of the most unique neighborhoods in the whole metropolitan area. You might  find it hard to believe that you're still in New York City as you weave through  lush parklands, fabulous estates, magnificent mansions and high rise co-ops."

Riverdalians agree their "village-like neighborhood" is unique to New York City.  Area residents have painstakingly preserved and maintained their neighborhood's  personality, charm, green spaces, and historical and cultural attractions.  "There's something for everyone," says Solomon. "It's a great alternative."

Annette Hall is a freelance writer living in Framingham, Massachusetts.  Additional research and writing by David Chiu and Hannah Fons.