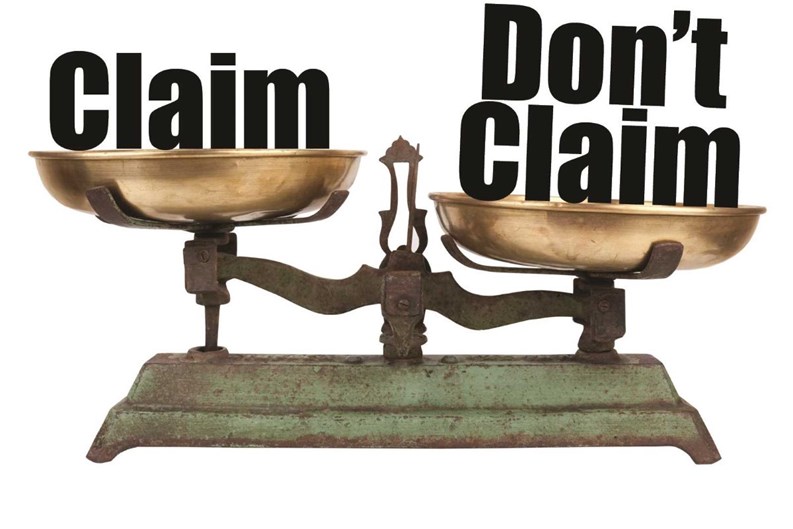 Individuals, associations and other entities carry insurance coverage to protect them from liability, loss, and other financial and legal threats—that's pretty basic. What isn't always so basic is deciding when to file a claim versus paying out of pocket for a loss or damage.

Paying—whether for property damage because of something like an unaddressed leak, or an injury sustained on-premises—can be very expensive, and arguably defeats the purpose of paying insurance premiums for coverage. On the other hand, a history of claims can cause a building or association to pay ever-higher premiums, or even be dropped from its insurance entirely…or so conventional wisdom tells us. Let’s investigate further.

When determining whether or not to claim a loss on an insurance policy, the first criterion is what sort of claim it would be. A broken window or a leaky roof is a vastly different matter than a slip-and-fall. Let’s take the latter scenario first, as it is more straightforward.

“Liability claims should always be put in to the insurance company,” says Ed Mackoul, president of Mackoul & Associates, an insurance brokerage in Island Park. “There’s just a certain amount of time, if you don’t report that claim, the insurance company can come back and say you prejudiced their case, and a liability suit can run into the millions. So once you’re aware of anything on the liability side if you get a letter, or somebody claims they got injured, anything along those lines—you need to put the claim in.”

In our litigious society, this is a hard rule when it comes to injuries. Remember the case of the woman who sued McDonald’s because she got scalded by hot coffee? Anything can happen beyond the realm of insurance protection. “In an injury situation, I advise the client to always report it to the carrier, even if there seems to be no harm done,” says Mike Bostley, the senior vice president of claims at Manhattan-based DeWitt Stern, an insurance brokerage and risk management group. "Because if you don’t, and it turns out to be a tricky case where what initially appeared to be a minor injury turns out even a year later to be something where the person needs surgery, or even if it just develops into a very high-profile case… at that point you’re jeopardizing your coverage with the insurance carrier for late notice. And to investigate it under a reservation of rights to a possible declination.”

In short, the professionals generally agree that the potential negatives of not filing a claim far outweigh any gain. “In my opinion, it’s always better to file, and let the insurance company decide what they want to do,” says Steve Principe, owner of The Principe Agency, an insurance brokerage in East Meadow. “Especially in a liability situation. I get a lot of calls where a property manager will tell me that a person fell outside, but didn’t get hurt, and 'please put it on record, for record only.' There really is no such thing as ‘for record only.’ Once I know about it, I have to call it in, and let the insurance company decide whether or not they want to pursue the claim.”

Indeed, the job of evaluating potential liability is part of what your insurance premiums pay for. “They may make one phone call, because they don’t want to go to court or have the person sue,” Principe continues. “So it’s up to them to make the decision. If you don’t give them that opportunity, if you don’t call it in, they’re going to deny the claim.”

Also, brokers say, any liability claim could wind up in court, and you don’t want to be in a situation where you lack coverage or have no coverage at all.

With respect to property claims, the decision is less cut-and-dried than with liability, and is based on a certain calculus comparing the extent of the damage to the possibility of premiums being increased, or the policy being terminated outright.

“Insurance companies take a look at your loss history,” Mackoul says. “And they look back five to ten years. So if you want to stay with your current insurance company, every year upon renewal, they take a look at your losses. If you want to go with a new company, you have to give them a synopsis of all the losses you’ve had in the last three to five years. So every time you put in a claim, it’s on record.”

There is a perception that one giant claim will cause all insurance companies to avoid the claimant like the plague for years to come. This is not necessarily the case, say the experts. “What I tell people is that it’s not that one large claim, like you had a fire, and it was a fluke, and they paid out $300,000,” Mackoul says. “That’s generally not the one that gets you in trouble. It’s the five or six water damage claims that do, because the insurer sees repetition there. They may not have paid out a lot on those claims but they’re seeing continuity. So they figure that sooner or later, they’re going to have that large claim. So the multiple smaller claims can actually be a lot more trouble than the one larger claim.”

Insurance companies are very good at determining the probability of certain events happening based on data. “If all the claims are about the same thing, like water damage, then they’ll assume that there’s something wrong with the plumbing,” Mackoul says. “Just like if there’s numerous slip-and-falls outside, they’ll think well, there’s a good chance that there’s something wrong with the sidewalk, or maybe that the super isn’t getting out there quickly enough to salt during the snowy season, and people are slipping on ice.”

It tends to be easy to predict whether one's coverage is at risk of termination. “It can happen if the claims are related to something the insurer saw in an inspection,” Mackoul says. “If they do an inspection and tell you that your sidewalks need repair, and you don’t do the repairs, and then you have a couple of slip-and-falls, they’ll cancel you. It mainly happens for not keeping up the building.”

This is the reason it is sometimes advisable to not claim every last thing that happens - especially when there are no liability issues.

"The first strategy is to determine what the amount of damages is on the claim, and that’s usually after you stop,” Bostley explains, “whether it’s a pipe leak or whatever casualty it is, and then get a contractor in to give you a repair estimate.” From there, it’s necessary to determine who is responsible to pay for what; some claims might be the responsibility of the individual shareholders or unit owners, and not the co-op or condo itself. “As an example, the building may be responsible for the plaster and a prime coat of paint, while the tenant or shareholder may be responsible for the finish coat of paint,” he says. “And that’s usually determined in the bylaws and proprietary lease.”

Then it becomes, in effect, a math problem.

“If your deductible is, say, $5,000 and you have $6,000 worth of damage, some boards will think twice about submitting that claim, because they don’t want to put a loss on record just to collect a thousand dollars,” Mackoul explains. “So in scenarios where the claim isn’t that much higher than the deductible, a lot of the time it may be in their best interest to pay those couple of dollars out-of-pocket and avoid a claim being on history.”

Principe agrees. “The only time I wouldn’t call the claim in is a pure property claim that’s below the deductible,” he says. “Like a small water leak, or if the wind blows a couple shingles off the roof. If you have a $5,000 deductible, and the roof shingles don’t even cost $4,000, you’re obviously not going to call it in. Or if it’s just a thousand dollars over, I’m probably not going to call it in.”

Regardless of the scope of the accident or who was at fault, the number of insurance claims you file has a direct impact on your rates. The greater the number of claims filed, the greater the likelihood of a rate hike. File too many claims and the insurance company may not renew your policy. Similarly, if the claim is being filed based on damage that you caused, your rates will almost surely rise.

On the other hand, if you aren't at fault, your rates may or may not remain unchanged. Getting hit from behind when your car is parked or having siding blow off of your house during a storm are clearly not your fault and may not result in rate hikes, but this isn't always the case.

Because any claim at all may pose a risk to your rates, understanding your policy is the first step toward protecting your wallet. If you know that your first accident is forgiven or that a previously filed claim won't count against you after a certain number of years, the decision of whether or not to file a claim can be made with advance knowledge of the impact it will or won't have on your rates. Talking to your agent about the insurance company's policies long before you need to file a claim is also important.

Some agents are obligated to report you to the company if you even discuss a potential claim and choose not to file. For this reason, you also don't want to wait until you need to file a claim to inquire about your insurer's policy regarding consultation with your agent.

But even when the math makes perfect sense, there are scenarios in which the claim should be reported regardless, even when there are no obvious liability issues.

“The only exception is when there’s a water damage claim that could result in mold,” Mackoul says. “In New York, mold is covered as long as it’s resulted from a covered cause of loss. And in order for an insurer to cover mold remediation, there needs to be an original claim. They need to know that the pipe burst, for example. So if you’re talking about a water damage claim where mold can or will likely result, then it’s probably best to put that in. If you don’t put in the claim, you may be taking away your right to have the mold remediated.”

Insurance is all about risk assessment. So is knowing when to report a claim. When it doubt, chances are, it’s better to notify the carrier than not.