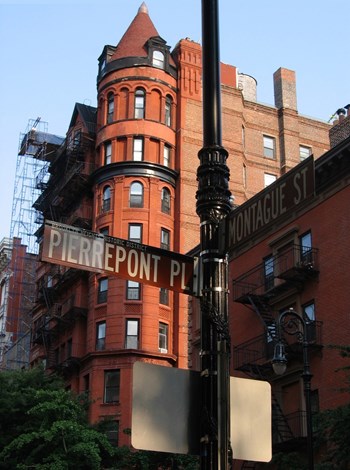 Perched on the East River waterfront and offering up stunning views of the  Statue of Liberty, the Manhattan skyline and the Brooklyn Bridge, Brooklyn  Heights is the borough’s most expensive neighborhood and attracts tourists by the busload.

The scenic neighborhood is known for its tree-lined streets, well-manicured  public parks, and picturesque rows of stately brownstones and Greek and Gothic  revival houses. The promenade, considered by many to be one the most romantic  spots in New York City, is a favorite destination for tourists, joggers,  strollers and weddings. The one-third of a mile long pier has popped up in the feature films Annie Hall  and Moonstruck.

Located directly across the East River from Manhattan, Brooklyn Heights is  bordered by Atlantic Avenue to the south, Cadman Park and Court Street to the  east, the East River to the west, and Old Fulton Street to the north. This tony  enclave has long been a haven for a number of New York’s most elite residents, notable personalities and literary figures.

Brooklyn Heights was also the first neighborhood protected by the 1965 Landmarks  Preservation Law of New York City. Plymouth Church of the Pilgrims and our Lady  of Lebanon Maronite Catholic Cathedral are also located in Brooklyn Heights.

When Thomas Fulton introduced the steam ferry in 1814 many considered Brooklyn  Heights to be New York’s first commuter town with the ferry providing daily, reliable service from  Brooklyn Heights to Wall Street.

Shortly after wealthy families, notable New Yorkers and well-to-do  industrialists began moving to Brooklyn Heights to enjoy “all the advantages of the country with most of the conveniences of the city,” according to a local real estate agent. With the opening of the first subway in  the early 20th century, vast numbers of New Yorkers began migrating to Brooklyn  Heights.

The executive offices of the Brooklyn Dodgers were located for many years at the  intersection of Montague and Court Street. A plaque on the building that  replaced the Dodgers’ former headquarters at 215 Montague Street identifies it as the site where  baseball player Jackie Robinson signed his landmark major league contract in  1945. He debuted with the Brooklyn Dodgers (breaking major league baseball’s color line) on April 15, 1947.

By the 1950s, a new generation of property owners began moving into the Heights.  They pioneered a Brownstone Revival by buying and renovating pre-civil war  period houses. This movement culminated in the passage of the 1965 Landmarks  Preservation Law. The details of this period are described in the 48-page  illustrated book “Battling for Brooklyn Heights/New York’s First Historic District,” which is available on the website of the Brooklyn Historical Society.

The list of literary figures who have called Brooklyn Heights home is long and  impressive. Arthur Miller, Truman Capote, Norman Mailer, Carson McCullers, Walt  Whitman and Thomas Wolfe are just a few influential writers who have resided in  the neighborhood.

Henry Miller, author of the infamously banned novels Tropic of Cancer and Tropic  of Capricorn moved into 91 Remsen Street with his wife June, in 1924. “It was a stunning place she had to rent, but far beyond our means,” Miller wrote of his Brooklyn Heights apartment in Plexus, book two of the  fictionalized account of his early life, “I was convinced if we took it we’d be sunk.”

Henry and June were evicted from the Remsen Street digs a year later for failing  to pay the rent. Actors Fred Ward and Uma Thurman portrayed the pair on the  silver screen in the film “Henry and June” in 1990.

Many believe that the architectural preservation is part of the neighborhood’s allure and charm.

The yellow mansion at 70 Willow Street where Truman Capote wrote Breakfast at  Tiffany’s in 1958 recently sold for $12.5 million. According to city records, the sale  is the most expensive in Brooklyn history as well as anywhere outside of  Manhattan.

The affluent neighborhood continues to attract prominent New York personalities.  Actors Paul Giamatti and Gabriel Byrne are current residents. Sarah Jessica  Parker and her husband Matthew Broderick are in the process of purchasing a  pair of townhouses in South Brooklyn Heights on State Street near Sidney Place.

Brooklyn Heights also continues to make cameos in feature films. The 2011  Romantic Comedy was filmed primarily in Brooklyn Heights. The neighborhood also  was the setting for several television sit-coms including “The Cosby Show” and “The Patty Duke Show.”

Saint Francis College is located on Remsen Street and occupies half a city  block. As of 2010, 2,000 full-time students and more than 400 part-time  students from 80 countries attend the college. The school has been ranked by  the New York Times as one of the more diverse colleges in the United States.

The area also attracts tourists and New Yorkers for its’ popular literary tours, and influx of art galleries and restaurants.