Do not show again [X]
By Lisa Iannucci   2010 September Neighborhoods 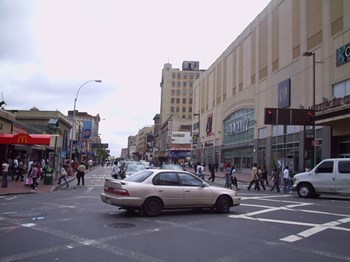 Linda Cunegin is extremely proud of the fact that she has lived and worked in South Jamaica, Queens since 1957—and she's planning to stick around. She is owner of Tri-County Home Nursing Services Inc., a company started by her mother in 1981, which services and hires employees and clients in three counties, including Queens. Cunegin says that over the years Jamaica has become a melting pot of ethnicities and a major cultural and entertainment center.

According to the Greater Jamaica Development Corporation, Jamaica Avenue was once a trail used by indigenous tribes from as far away as the Ohio River and the Great Lakes who came to trade skins and other goods with local Carnarsie people. Dutch governor Peter Stuyvesant dubbed the area Rustdorp in granting the 1656 charter. The English, who took it over in 1664, renamed it Jameco,the Carnarsie word for beaver. With the passage of time and some warped pronunciation, Jamaica was born.

George Washington really did sleep here during the Revolutionary War, and Jamaica continued to be a trading post for farmers and produce after conflicts between American and British forces eased. The public school system started in 1813 and by 1834, the Brooklyn and Jamaica Railroad Company had completed a line to Jamaica. By 1850, Jamaica Avenue (then called Fulton Street), had become a plank road, complete with toll gate. In 1866, tracks were laid for a horsecar line, and 20 years later it was the first in the state to be electrified. In 1898 Queens, of which Jamaica is the county seat, became part of the City of New York.Today, more than 200,000 people call Jamaica home.

Brigit Pinnel is with the Jamaica Center Business Improvement District (BID) and she says that Jamaica has had its period of struggling, but “there has been signs of development and improvement made on many fronts, including transportation, residential and commercial, culminating in an overall improvement in the area,” she says.

According to statistics from the Jamaica Center BID, between 2000 and 2008, nearly $1.8 billion in public and private funds was invested in Downtown Jamaica for retail, residential, and cultural developments and to improve regional transportation access. During that time, new development created 5,200 units of housing, 2.1 million square feet of retail space, 1.8 million square feet of commercial office space, and 1,000 to 2,000 hotel rooms. According to Pinnel and the BID, more development is on the way.

In addition to more retail shops and hotel rooms, Jamaica has become a hotbed of tourism and cultural events. Although Jamaica is only a short distance to New York City, residents are now enjoying their own arts and culture.

The Jamaica Center for Arts and Learning {JCAL}, located in the downtown Jamaica business district, was founded in 1972 when the declining neighborhood was being revitalized. It is located in a historic building that was once the Queens Register of Titles and Deeds Building."We’re called the 38-year-old secret because people are pleasantly surprised by what they find here,” says Kesia Hudson, marketing director for the JCAL. “It's the same quality that you would find in Manhattan and it's a nice variety of arts and entertainment at an affordable price that’s easy to get to.”

Hudson also says that Jamaica "isn't just about getting a new apartment or new house, but it's about the other amenities that make a house a home, including the programs offered by the JCAL.” The JCAL's facility includes a visual arts gallery, a theater, painting, dance and ceramics studios and a newly renovated, soundproof music studio, workshops and free or low-cost programs, among many other offerings.

Pinnel says that one major project of BID is to promote the historical aspects of Jamaica. “We have the King museum, a 350-year-old cemetery and a 1920s theater that has been converted. The 1920s and 1930s saw the building of the Valencia Theatre (now restored by the Tabernacle of Prayer). We have a welcome kiosk from April to December that’s staffed by a greeter who distributes a map and guides tourists along the way,” says Pinnel. “Jamaica attracts tour bus groups from as far away as Ohio and Maryland who take days to shop in Jamaica. So many stores have good value."

King Manor is named after Rufus King, a signer of the Constitution who came to live in Jamaica in 1805. He added to a modest 18th century farmhouse, creating the manor which stands on the site today. King Manor has been restored and now houses the King Manor Museum.

Jamaica wasn’t always such a melting pot. While today’s population consists mostly of African Americans and a mix of several other ethnicities, throughout the 19th to early 20th centuries, Jamaica was mainly populated with whites. In the 1950s, whites moved out and African Americans started moving in. In the 1970s, Hispanic and West Indian immigrants also moved in to the Jamaica Avenue and South Jamaica areas when housing prices dropped. These ethnic groups tended to stay more towards the Jamaica Avenue and South Jamaica areas.

John Ma, a broker with Century Milestone Realty lives in Staten Island but his office is in Jamaica. He remembers when he came to Jamaica in 1980 that nobody wanted to buy a home in the area because of its bad reputation and the fact that nobody could afford a home.“Since then, in the mid-1980s, it started changing and there have been improvements,” says Ma. “More businesses are also moving into the area and more families of different ethnicities."

From Old to New

One of the more popular neighborhoods in the area is Jamaica Estates, a wealthy neighborhood created at the turn of the century by the Jamaica Estates Company. It is distinguished by its historical Tudor-style homes, expansive greenery and landscaping and a unique street system.Green development has also made its way into the neighborhood. One of the major residential developments in the area is Moda, a new, 346-unit, LEED certified green building with a choice of studios and one- and two-bedroom apartments built at the site of the former Queens Family Court building. This $194 million dollar renovation, which is being undertaken by The Dermot Cos., will preserve the building's original facade, while creating a space that uses 14 percent less energy. The hope is that the building will not only provide housing to low- and middle-income families, but will also create construction jobs in the neighborhood.

"We're hoping it's a catalyst for further development," Drew Spitler, vice president of development at The Dermot Cos., said in a release.The building is contemporary inside with the former building's brick and stone façade and comes with the most up-to-date services and amenities.

Steven Ostad, a broker and CEO of Empire Realty in Queens, agrees that housing prices have fallen a bit since the downturn. "Right now, the going rate for co-ops is going to hover around $150,000 plus or minus $10,000-$20,000 for one bedrooms whereas two bedrooms are somewhat of a better deal at around $250,000. For condos, prices for one bedrooms are pretty comparable but you can easily be spending twice as much for two bedrooms because some prices hit north of $450,000. At the same time, given that the market is not fully recovered, there is definitely room for negotiating down condo prices." Rentals, he added are generally around$1,400 per month while two bedrooms are around $1,800 per month.

Ostad adds that home prices have yet to bottom out due to a negative rate of job creation in the neighborhood and continued foreclosures. Existing inventory has to be absorbed into the market first before prices begin to appreciate—and that won’t happen until unemployment rates improve, he believes. Queens has been hardest hit by the recession, and recent numbers tell the same story. According to a recent article in The Real Deal, "South Jamaica, Queens, had the highest foreclosure rate in the five boroughs with 1.79 percent of housing units receiving notices during the first six months of 2010. Jamaicahas been the New York City neighborhood hit hardest by the foreclosure crisis."

But if past history is any indication, Jamaica, Queens will find its way back. Once plagued with a bad reputation and increasing crime, violence and drugs, the area has worked hard to overcome and give more residents, like Cunegin, something to be proud of."People settle and build roots here; it's multigenerational too,” she says. "Residents are very dedicated to Jamaica."