Do not show again [X]
By Jonathan Barnes   2007 Apr Neighborhoods 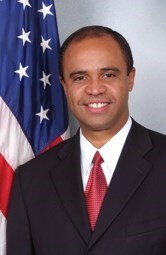 Lobbying for one cause or another has always been a part of the daily life in New York City. These days, in the Bronx, it's the borough president who is the most prominent person lobbying for the interests of those living in the borough. Things have changed from the rough days of a century or so ago, when citizens of what was to eventually become the Bronx had no elected official to contact for help with everyday problems.

It wasn't until 1890 that the office that preceded the Bronx presidency was created. The Commissioner of Street Improvements was the first office in what became the presidency, according to Bronx Borough Historian Lloyd Ultan. The office was created to fill an urgent need to have passable roads in the area, which was still partly rural at the time.

"Wagons would sink to their hubs, and horses to their chests, in a rainstorm on those dirt roads," says Ultan, a professor at Lehman College and Fairleigh Dickinson, and a lifelong Bronx resident who was appointed to the unpaid position of borough historian in 1996 by then-president Fernando Ferrer. "A group of businessmen and citizens lobbied to create the office."

In 1898, the city annexed Brooklyn, Queens and Staten Island, and created the five boroughs. The Bronx presidency was created at that time to represent those living in the borough. "The mainland became the Bronx, named after the river, and the president's office was now a four-year office," says Ultan.

"In addition to planning, it's now the bully pulpit," says Ultan. "[Presidents] try to promote the borough for businesses and residents. They also tend to be an ombudsman for the Bronx residents and businesspeople."

According to the office of the current Bronx president Adolfo Carrion, Jr., the borough president still works with the mayor to prepare the annual executive budget submitted to the city council, reviews and comments on major land use projects, and proposes sites for city facilities within his jurisdiction.

In an historically-fitting nod to the origin of the office, the president's office still houses the Bronx's Topographical Bureau, which is responsible for maintaining the borough's official maps and assigning street addresses.

Works Well With Others

Like his predecessors in the office, Carrion works to further the interests of his borough. Representing the interests of 1.3 million residents can be hectic, and a recent week included Carrion and his staff preparing for his State of the Borough address while simultaneously making preparations for a visit by presidential candidate Sen. Hillary Rodham Clinton. Carrion prefers to focus on what his administration has built and that which it is working on building.

"One of my proudest accomplishments has been rebuilding our housing stock and creating new housing opportunities for all New Yorkers," says Carrion. He notes that $2.4 billion has been invested and 28,000 housing units built in the Bronx just in the past five years alone. About 7,500 people have become homeowners in the borough over that period, he adds.

Carrion is close to halfway through his second four-year term and thus, he can't run for borough president again. Though he is rumored to be considering a run for mayor in the future, Carrion declined to comment on the possibility.

In his recent State of the Borough address, Carrion touted the successes of his administration during the past five years.

"Our progress is the result of our work. I have not done any of this alone. Let me say thank you to my colleagues in government who have put time, energy and support behind their words," Carrion said in his remarks. "In five years, we've created more private sector jobs in the Bronx than any other borough—10,000 new private sector jobs have been created during my administration. Thirty-thousand people have found jobs and unemployment was cut by more than 50 percent from 11.3 percent to 5.4 percent. And, 13,000 fewer people are living in poverty. Last year, the Bronx ranked third in the state and first in the city in personal income growth."

In his speech, Carrion also touched on transportation issues in the Bronx, including initiatives like the reconstruction of the Grand Concourse and improvements to Fordham Road and the Major Deegan Expressway.

Carrion's comprehensive look at the borough included recognition of the stresses caused on the environment by cities. He pointed out how his administration has been working to create a "greener" borough.

"On our 44 square miles of God's good earth called the Bronx, with a population of nearly 1.4 million, we have done what I believe this city and cities around the world should do," said Carrion, who added that one new initiative will fund the creation of green roofs. "These green roofs reduce heat by 27 percent to help to retain heat during the winter and cool during the summer, capture and use storm water, and can serve as community gardens. We've coupled this with insisting that new development is sustainable buildings that are built with environmentally-friendly material and efficient in the use of energy, including solar panels and reuse of storm water."

The borough president also named a wish list of projects that he hopes will become reality in the Bronx in the near future, including a new children's museum, as some of the positive developments on the horizon. With a bit less than three years in his second and final term as president, Carrion has much work to do.

"We've got our work cut out for us and little time remaining," Carrion admitted, and then he gave a nod to speculation that he'll seek another office after his current term is done. "As you know, after I'm done serving as borough president, I will continue serving our city in one capacity or another. So, over the next few years, in addition to all the good work we will continue to accomplish here, you will hear me chime in with more regularity on the issues that affect every borough of the greatest city in the world.

"I'll be talking about the need to keep our finances in order and pay as we go, and not give our generations' burden to future generations. I'm going to talk about our need to continue to be a city of opportunity where people from all parts of the country and the world come seeking opportunity and a better life and they can find it. I'm going to tell the Bronx story."

Jonathan Barnes is a freelance writer and a frequent contributor toThe Cooperator.