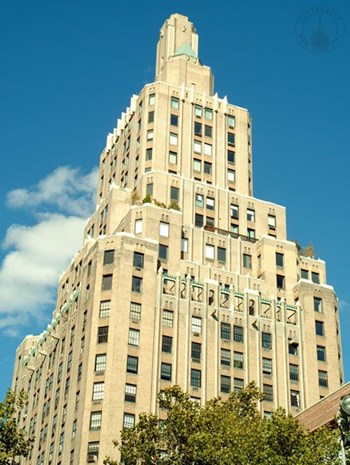 In its latest Biography of a Building, New York Magazine profiled the iconic One Fifth Avenue, calling the 27-story Art Deco building the “downtown co-op of all downtown co-ops” and “an expression of a certain type of New York–ness.” Indeed, according to the profile, the distinguished address exemplifies the quirky-artist/investment-banker character of its Greenwich Village location, with a residential pedigree that spans punk rock icons to Republican die-hards.

After several decades as an apartment-hotel that brought New York’s elite downtown to experience the area’s burgeoning postwar counterculture, according to the article, the building was acquired by NYU, spending about a dozen years housing students and faculty along with the high-society renters who had long called One Fifth home. When the university fell onto hard times in the 1970s, it sold the building, which then became a cooperative in 1976.

It was during these early co-op years that many eminent art-world personalities moved into One Fifth, some purchasing their units for under $10,000. Notable residents include musician Patti Smith, film director Brian De Palma, and writer Wendy Wasserstein. In the ensuing years, wealthier cooperators moved in, some scooping up multiple units to combine into sizable homes, others conducting luxury renovations to upgrade their 1920s units.

One such shareholder was a plastic surgeon by the name of Ronald Levandusky. In 1988, in what New York Mag dubs “The Steam-Pipe Incident,” the board of One Fifth put a halt on kitchen renovations Levandusky was doing when he relocated a steam pipe without proper authorization from the board to alter a common element. Levandusky sued the board and lost; the 1990 Court of Appeals found that "[So] long as the board acts for the purposes of the cooperative, within the scope of its authority and in good faith, courts will not substitute their judgment for the board's"; the ruling reaffirming and fortifying a co-op or condo board’s governance protection under the Business Judgment Rule.

Attorney Stewart Wurtzel, of Manhattan law firm Tane Waterman & Wurtzel, P.C. calls Levandusky “still the most important decision affecting co-ops and condominium boards, since it sets the standard by which every board member’s actions are scrutinized and reviewed.” According to Wurtzel, the ruling “set forth a standard analogous to the Business Judgment Rule by which the Court would not substitute its judgment for that of the board.”

Stuart M. Saft, a real estate attorney and partner at Manhattan-based firm Holland & Knight and chairman of the Council of New York Cooperatives & Condominiums (CNYC) adds that “In Levandusky, the unanimous outcome was that courts could not look into decisions made by cooperative and condominium boards unless there was a showing of bad faith, self dealing, or discrimination. It gave boards a free hand to make decisions with regard to the building, the corporation or the condo, and the shareholders or unit owners.”


So influential and precedent-setting was the case that today, even decades later, in the world of co-op and condo law, everyone knows Levandusky. Perhaps that explains why Dr. Levandusky subsequently sold his One Fifth co-op. According to New York, the purchaser was none other than television director James Burrows, who directed and co-created the beloved TV show Cheers—another iconic place where everybody knows your name.
Share Twitter Facebook Pinterest LinkedIn Tumblr Email