Do not show again [X]
By Brendan Flaherty   2010 Feb Neighborhoods 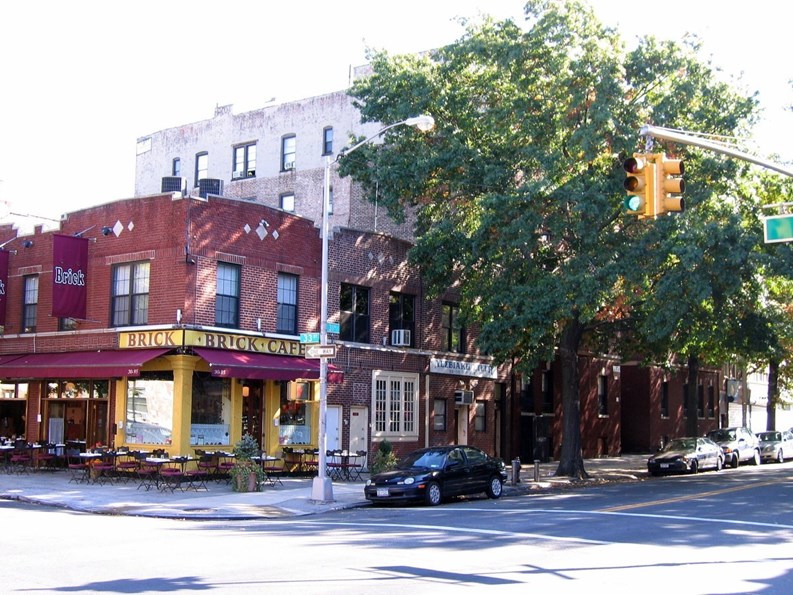 Astoria Boulevard is the second-to-last stop on the N-W subway line. The N train  whistles against the track on a banking turn near 39th Avenue, five subway  stops south of Astoria Boulevard. There’s a sign posted inside the train explaining that “falling leaves when crushed by moving trains” make for slippery travels, and as a result, “trains may operate at reduced speeds and/or operate slower than normal.” Despite the redundancy, the ride from Times Square is still under 30 minutes.  At night, on the elevated platform, the lights of Manhattan blink quietly  across the East River, and the city’s closeness is clear.

In addition to its proximity to Manhattan and relative affordability, Astoria’s key defining characteristic is probably its rich multiculturalism. Even in a  city as diverse as New York, Astoria’s unique ethnic blend is noteworthy—and like other neighborhoods and boroughs throughout the city, that blend has  morphed and evolved over the decades as tides of immigrants and home-seekers  have ebbed and flowed.

But before the Greek tavernas, the elevated trains, and even the heavy  smattering of Dunkin’ Donuts stores, there was Astoria’s first settler: an Englishman named William Hallett.

According to the Greater Astoria Historical Society, Hallet received a grant for  the land—2,200 acres in all—from Governor Peter Stuyvesant in 1652. Twelve years later, Stuyvesant ratified  the grant by actually purchasing the land from Native Americans tribes. The  cost was 58 fathoms of wampum, seven coats, one blanket, and four kettles. The  area, formerly called Hell Gate, became known by the more prosaic name of  Halletts Cove. Dutch and German settlers arrived in the area in the 1600s. In  the 1800s and early 1900s, Irish and Italian immigrants followed suit.

In the mid-1830s, however, Astoria was still heavily forested and sparsely  populated. Fur trader Stephen Halsey took note of the undeveloped land while  taking a ferry to his home in Flushing. Halsey saw an opportunity in the area's  proximity to Manhattan, and with the help of his brother, he purchased land and  began to develop it. He laid out streets, built houses and stores. Homesteaders  began to trickle in, but even so, Halsey knew he needed more investors to  establish a community with long-term stability and staying power.

It just so happened that Halsey was a close acquaintance of John Jacob Astor,  the wealthiest man in America. Astor was a German flute-maker who emigrated to  America after the Revolutionary War. In America, he grew fabulously wealthy  trading furs and opium. Then Astor expanded into real estate, buying tracts of  land in and around New York City. To persuade Astor to invest $2,000 in his new  development venture, Halsey helpfully rechristened the village “Astoria.” The 76-year-old millionaire invested $500. He never set foot in the nascent  neighborhood that bore his namesake, but “Astoria” stuck anyway.

Much has changed since the days of Halsey and Astor, of course—particularly the ethnic makeup of Astoria, which has shifted many times since  the village became incorporated and assimilated into New York City. According  to Mitchell Grubler, former executive director of the Queens Historical  Society, even though today’s Queens is vastly different from Queens in the 1600s, it is diversity that  remains one of the area’s primary personality traits. Grubler says there are more than 112 languages  spoken in Queens today, and that in itself makes Queens a cultural  treasure-trove.

One of the more prominent of those languages is Greek. The 1960s brought a large  influx of Greeks to Astoria, and today, some 30,000 Astorians have Greek  heritage, making the neighborhood one of the largest concentration of Greeks in  the world outside of Greece itself.

While Astoria's Greek contingent has become a neighborhood hallmark, the  mid-1970s brought new immigrants from Egypt, Lebanon, Morocco, Tunisia, and  Yemen as well. And today, there are burgeoning populations from South America  and South Asia.

The restaurants and shops that have established themselves to serve such a wide  cross-section of residents have become attractions unto themselves, drawing  more people to the neighborhood and fostering a sense of community in  diversity. As Anthony Carollo, owner of Queens-based Carollo Real Estate, says,  “We all seem to gel.”

Grubler agrees, and adds that from Chinese to Korean to Latin American and  beyond, Queens is rich in culture and cuisine, because of what the people bring  with them to their new community. “I think we’re getting away from the ‘melting-pot’ theory, actually,” he says. “All of the groups maintain their individual cultural identities.”

Community and access to services also are drawing families to the borough like  never before. That sense of community can be hard to find in other parts of the  city, says Jacqueline Alvarado, a broker with Coldwell Banker who handles  properties in Queens and the other outer boroughs.

“There are also lot of growing families who are looking for better education for  their kids and better school districts,” she says, “and people like to buy around this neighborhood for that reason.”

According to Carollo, Astoria—and Queens as a whole—was profoundly affected by the citywide real estate development buzz of recent years...as well as the  bust. Developers took advantage of Astoria’s high zoning (R5 & R6), which allowed them to tear down single and multi-family houses and build  condominiums in their place. With many new units on the market, in addition to  existing resale units, Astoria has a high inventory of condos.

But, it is also important to remember that common charges in new condos will go  up as soon as the developer turns control of the property over to the HOA, says  Carollo. Lots of new HOA boards don’t realize that the development company may have been getting discounts from  vendors or it may not have been paying for a property management service. Then,  when the newly-appointed HOA board takes over full control, they suddenly  realize that their costs are higher than the developers’ had been and common charges will have to increase.

In condos, Carollo says prices have come down some since the recession, but  haven’t dipped as low as they might. The problem now is the same as it is everywhere.

“Development needs to be spread out thin,” says Carollo. “There was too much, too fast.” Banks threw money at projects and developers overbuilt. Now that the economy is  slogging along, loans are very difficult to come by and condos are not being  sold. As a result, some new condo buildings in Astoria are being converted into  rentals.

Rental rates right now are about $1,200 to $1,300 for a one-bedroom, but as more  units turn into rentals, the rising inventory will likely bring rental prices  down too. One of the biggest factors affecting the rental market, says Carollo,  is the unemployment rate.

Without job security, people aren’t upgrading, and many young people and recent graduates are opting to live with  their families rather than sign a lease or attempt to get a mortgage to buy a  unit.

Like all New York City's iconic neighborhoods, Astoria is rich in culture and  history, and its face changes with the years in such a way that inhabitants  might not recognize their old stomping grounds from one decade to the next.  That being said, part of Astoria's strength and charm is the diversity that  keeps the neighborhood in a near-constant state of flux from year to year.

Brendan J. Flaherty is a freelance writer living in Brooklyn and a frequent  contributor to The Cooperator.