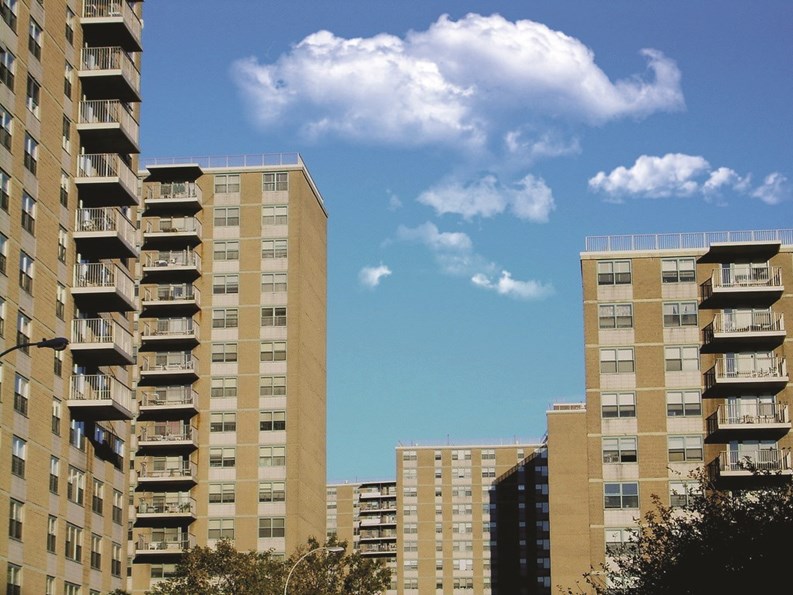 In 1955, when many city neighborhoods were deteriorating and the flight to the suburbs was going full blast, the Mitchell-Lama bill, named after state Sen. McNeil Mitchell and Assemblyman Alfred Lama, was signed into law in New York State. The purpose of the bill was to encourage the building of moderate-income housing, to keep more middle-class families in the state’s cities and to stabilize New York City neighborhoods.

By the time the last Mitchell-Lama development was built at the end of the 1970s, about 270 developments with nearly 140,000 units had been constructed under the program's aegis. Some were rentals, others were co-ops.  Some were state-sponsored, others were city-sponsored. Written into the program was a 20-year age-out period, after which the landlord or co-op corporation could buy out of the program. In most cases, that 20-year period is up, and Mitchell-Lama residents have been facing the implications of “going private.”

For one reason, the neighborhoods where many of the original Mitchell-Lama developments were built have changed dramatically in 30 or 40 years. Areas that were once semi-deserted or even blighted have become fashionable and trendy, driving real estate values up. Indeed, a more cynical read of the bill's original intent might suggest this was one of the reasons for the law to begin with—to spur private development.

While very many Mitchell-Lama developments and buildings have decided to “go private” once the 20-year subsidy period was up, there are still many left within the program. The largest Mitchell-Lama co-op development in the city is Co-op City in the Bronx, while the largest Mitchell-Lama rental development is almost certainly Spring Creek Towers/Starrett City in Brooklyn. (In fact, the owners of Starrett City tried to opt out of the program and put the entire development up for sale in 2007— but alarmed local, state and federal elected officials got involved and forged a deal the following year to preserve affordability.)

In the context of a Mitchell-Lama co-op, the debate over privatization almost always pits the opportunity it would give shareholders to sell their apartments in today’s lucrative real estate market against the desire to preserve the dwindling supply of affordable housing stock for future generations. In the not-so-distant past, total privatization seemed to be inevitable. However, with Mayor de Blasio’s emphasis on affordable housing, things could be changing.

As Eric Bederman, former spokesman for the city’s Department of Housing Preservation and Development (now the vice president of the Community Preservation Corporation in Manhattan), which supervises waiting lists and management issues for 84 Mitchell-Lama developments, says, “The city has worked diligently to preserve as much Mitchell-Lama housing as possible by keeping current properties in the program and working to bring properties that had opted out into affordability programs … As part of Mayor de Blasio’s Housing New York plan, we will continue to seize opportunities to extend affordability and preserve the city’s Mitchell-Lama housing stock.”

The state has also taken steps to preserve Mitchell-Lama housing. In 2012, Gov. Andrew Cuomo, then-Mayor Michael Bloomberg and the federal government helped to refinance Co-op City in a $621.5 million deal designed to keep the development affordable for another 35 years.

And Cuomo’s House NY program includes the preservation of 8,600 units of aging Mitchell-Lama housing, both in New York City and several other cities upstate.

Worth it to Leave?

In a Mitchell-Lama rental development, the process is much different. Once the 20-year period has lapsed, building owners have an absolute right to buy out, although they need to issue a 365-day Notice of Intent to both the HPD and the tenants, and then must follow certain requirements set forth in the Mitchell Lama rules. If this all works out, says Saft, “The landlord can pay off all the money he owes to the state or the city, based on whether it was under the supervision of HPD (NYC) or DHCR (NYS) and the building is out of the program.” Because of the relative simplicity of the process for landlords, many more rental buildings than co-ops have left the program.

By the way, although the words “buyouts,” “privatization” and “conversion” are often used interchangeably to describe the process of a building leaving Mitchell-Lama, they’re not quite the same thing. According to Berkey, a buyout implies repayment of the loan and other fees required to leave the program. Privatization refers to the process of converting the building from one that is government supervised to one that s privately owned and operated. And conversion and can either mean converting a building from Mitchell-Lama to one that will be to privately owned and operated, or (in a non-related meaning) converting a rental building to a co-op or condo.

Questions You Must Ask

There are quite a few questions that Mitchell-Lama boards and shareholders must ask when they are considering privatization. Attorney Leonard H. Ritz, of counsel at Adam Leitman Bailey, P.C. in Manhattan, lists some of them:

• How much is the process going to cost? There will be fees for lawyers, accountants, real estate consultants and more. Does the co-op have the cash reserves to pay for this?

• What will the impact be on any existing mortgage the co-op might have? Will it have to be paid off before converting and, if so, what will the source of the funds be?

• What will be the impact of the increased real estate taxes once the co-op loses its preferential tax treatment? As soon as the building converts, it will be taxed at full value, which means the co-op will be paying higher taxes, which will be passed through to shareholders through higher maintenance payments.

• For residents: What will be the price to purchase my apartment?

In some developments, shareholders may have to pay huge increases in maintenance, fees or assessments once they've left the program. To help offset these costs, many buildings use “flip taxes,” or a charge on the resale of units, to build up a reserve fund to be used for repairs and improvements.

What obligations does the board have to disclose the various stages of the privatization discussion to shareholders – and how involved are shareholders in each stage of the process, once it’s been approved?

“All boards have a fiduciary duty to act in the best interest of the corporation,” says Ritz. “Boards are also protected by the Business Judgment Rule. However, this decision is one of such magnitude that will materially affect all shareholders, and because approval of a super-majority of shareholders is ultimately required, the board should be making detailed information available to its shareholders throughout the process.”

Berkey goes into detail: “The rules require the board to circulate the feasibility study to all shareholders. The offering plan, which contains all aspects of the plan to go private, must be distributed to all shareholders, and they have the right to submit comments to the Attorney General regarding the plan.”

Once a building privatizes, Berkey adds, the co-op will pay real estate taxes based upon market values, so as mentioned above, shareholders’ monthly charges will increase. They will be able to obtain the market value of their units, sometimes in the hundreds of thousands or even the millions of dollars, plus their share of mortgage amortization payments that they made when they were owners. “To the extent that they are in a qualified cooperative and enjoy homeowner tax benefits,” he says, “they may be able to exclude the first $250,000, or $500,000 for a married couple, in profits on resale for taxation.”’

Those Who Can’t Buy

But what happens to those shareholders who cannot, or don’t wish to, purchase their apartments? Are their compromises that can be made?

Most co-op privatization plans allow those who cannot or do not wish to purchase their apartments to exchange their shares and leases for the equivalent of a rent-stabilized lease. Saft, who says he plays “the role of the quarterback” during Mitchel-Lama conversion proceedings, says, “Under my plans, they can always remain as renters at a rent that is similar to what they were paying, and the owners get the windfall when they die or move, and their apartment can be sold to the public.” His plans, he says, are always done “with the occupants maintaining control over their lives and homes.”

One example of a co-op that started out by voting against privatization several times, but that slowly moved toward its acceptance, is Southbridge Towers, a development of about 1,650 units near the South Street Seaport in Manhattan. Wallace Dimson, the president of the co-op board, termed some shareholders' initial opposition as “ideological.”

However, little by little, things began to change. In late 2005, the board first voted to have a feasibility study done, then a preliminary offering plan (which he referred to by its popular nickname of a “red herring,” because of the color of the ink on its cover) a few years later, and then other steps.

In September of 2014, after years of controversy and debate, shareholders finally voted to leave the program. Dimson said a “flip tax” on those who sell their units will preserve reasonable maintenance fees for those who stay.

Privatization In general, experienced attorneys are crucial to help the co-op go through the process, and, as always, they charge by the hour. There are law firms that specialize in representing Mitchell-Lama co-ops, and it would be wise for boards to engage firms with such direct experience. The law firms, in turn, will help the co-op hire accountants, appraisers and other experts to prepare the offering plan.

All in all, it isn’t a do-it-yourself operation. And those buildings that wish to privatize should be prepared for the long haul—HPD’s Bederman says the entire process can take several years.

So if your board wants to explore the possibility of going private, you would be well advised to start looking into it now, and assembling a strong team of financial and legal advisors your board will need to assess the feasibility of a buyout and help both your board and your shareholders navigate what can be a very long, often complicated process. The more information your board, management, and shareholders have, the smoother your transition will go, and the less chance there will be for tension between neighbors.