Do not show again [X]
By Rob Seitz   2008 July Neighborhoods 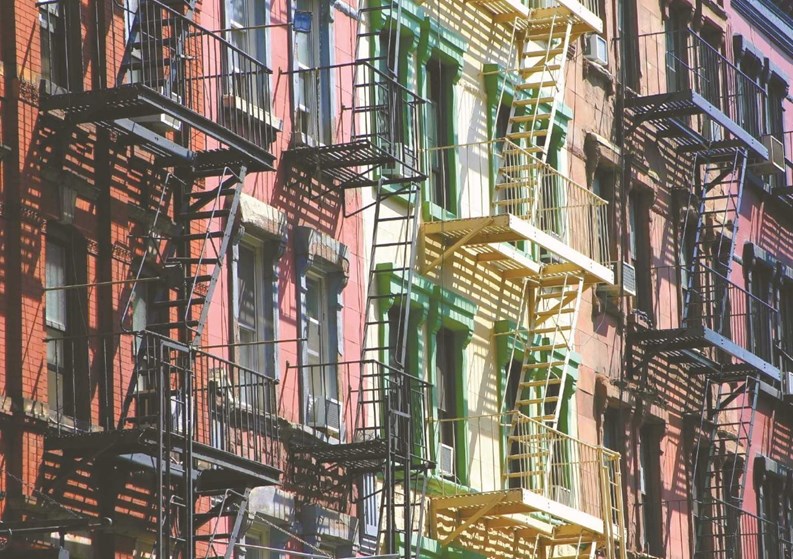 If only I had had an extra $100,000 25 years ago. (OK—an extra $100,000, today would be good too.) But that’s what I kept thinking as I sat chatting with Oliver Allen, a retired journalist and author who is now a regular contributor to his neighborhood’s monthly community newspaper, The Tribeca Triband its “unofficial” historian, in the to-die-for loft that he has shared with his wife Deborah since 1983. That’s the year the two of them pulled out of suburban Pelham, New York and never looked back.

The Allens paid $195,000 for their penthouse overlooking Duane Park at the same time that I paid $100,000 for a five-bedroom house in Mount Vernon—a world of difference. According to Deborah, their contemporaries “didn’t get it” when they sold their house to move to what was then still a pioneering residential outpost in Manhattan. The “Triangle Below Canal” was a very different neighborhood in 1983, with dimly-lit cobblestone streets, a sparse population, and very little in the way of amenities. The 2008 view from Hudson Street overlooking Duane Park on an unseasonably warm and sunny first day of spring could not have been further removed from this dark and distant memory. .

Tribeca is an area of Manhattan that is bounded by Canal Street, Church Street, Park Place, and the Hudson River. It is part of the oldest section of New York City, and its rich historical heritage can be seen in its weathered cobblestone streets, narrow alleyways, and an architectural encyclopedia of Federal, Italianate, Second Empire, and cast iron designs. The neighborhood’s nickname stands for “the TRIangle BElow CAnal,” and according to Allen, was first coined in a 1967 guide to the neighborhood published by the American Institute of Architects (AIA).

Originally, Tribeca was part of the Dutch colony of New Amsterdam, which was by historical legend bought from the Native American Indians residing there for around $24 in 1626. The bustling southern end of the island of Manhattan was overseen by the Dutch West India Company, and did brisk business as a fur-trading hub. In 1664, the British wrested control of the city from the Dutch, and re-christened it New York.

As New York evolved from a remote trading post to a center of commerce in the West, Tribeca was at the center of it all. As the fur trade tapered off, the neighborhood’s lifeblood shifted to fresh produce and dry goods, as well as shipping business from the nearby South Street Seaport area, and eventually textiles.

“[Tribeca] was the center of the butter and eggs trade from the 1850s to the 1940s,” says Allen. “To the north and east was the center for wholesale meats. The food came from the Jersey shore. It was shipped in railroad box cards that were then floated to the New York piers. A good portion of the freight came to buildings on this side of the Hudson, including 42 Hudson,” the former cheese factory that he and his wife now call home.

An early marker of Tribeca’s importance to the world of commerce was the construction of the Woolworth Building on Broadway between Park Place and Barclay Street in 1913. The neo-Gothic building was one of the world’s first skyscrapers, and was commissioned—and paid for in cash, to the tune of $13,500,000—by Frank Woolworth to house the headquarters of his discount retail empire.

While the Woolworth building still stands as a monument to the city’s early mastery of wealth and commerce, the majority of the industries of Tribeca have since relocated—although the neighborhood is still home to a number of food processors, job lot wholesalers and retailers.

Prior to becoming the Whole Foods Market of its day, Allen notes that “TriBeCa was a very choice residential area. St. John’s and Hudson squares have wonderful Federal Style houses all around it. It was a gated community, somewhat like Gramercy Park is now. Artists and writers lived in the neighborhood, including authors James Fenimore Cooper and William Cullen Bryant, and Thomas Cole, the founder of the Hudson River School of Painting who lived with his parents on Greenwich Street and painted in his attic before he got a benefactor.”

“But people started leaving in the 1840s when commercial activity was moving in, making it a less attractive place to live. The buildings began to fall apart,” Allen continues. “When Cornelius Vanderbilt bought property in 1868 from the city and turned it into a freight depot, that was the death knell of the community.”

The neighborhood lay mostly fallow as far as residential real estate was concerned for decades as light industrial and warehousing facilities dominated the landscape. Many of the area’s old buildings were cleared in the late 1960s and early ‘70s to erect the World Trade Center, but it wasn’t until the 1960s that artists and other pioneering creative types began eyeing Tribeca’s moldering industrial spaces as prime candidates for conversion into living lofts. Much as it was with Soho, Tribeca’s neighbor to the north, the accessibility of large, convertible, and reasonably priced spaces was the catalyst for the neighborhood’s second incarnation as a hot residential area.

Of course, with any emerging neighborhood—particularly one considered “fringe” by residents of more established parts of town—there’s liable to be friction between an area’s original inhabitants and the newcomers. Such was the case with Tribeca’s loft-dwelling artists and bohemians in the early 1980s, which was a tough time to live just about anywhere in New York City, but particularly in the wilds of Downtown Manhattan. Commerce clashed with art, and residents with their landlords, and sometimes the whole area seemed like a gritty, urban version of the Old West. Housing court records from the late 1970s and 80s are rife with accounts of harassment, lock-outs, rent strikes, complaints of raucous after-hours clubs being allowed to set up shop in loft buildings for the express purpose of annoying residents, and other less-than-savory tactics in the battle between loft-dwellers and their landlords.

No amount of acrimony between warring parties can dampen New Yorkers’ lust for square-footage however, and despite occasional scuffles between developers, landlords, and residents, Tribeca remains one of the most desirable—and most expensive—neighborhoods in Manhattan, if not the entire city. Beginning in the mid-to-late 1990s, there was a resurgence of interest in Tribeca as a place to live and work which began a revitalization and transformation of the area. The area is a magnet for celebrities—Robert DeNiro, Adam Horowitz of the Beastie Boys, and Ben Affleck and Jenifer Garner, to name just a few—and was home to the late John F. Kennedy Jr.

Still, the friction between development and neighborhood character remain. A quick read-through of the Trib and it becomes apparent that both pioneering early residents such as the Allens as well as newcomers to the neighborhood are anxious about preserving Tribeca’s low-density characteristic.

The community is especially concerned about the increase of large, potentially loud restaurants and bars obtaining liquor licenses that can keep their places jumping until four in the morning. Michael Levine, director of land use and planning for Community Board 1 (www.cb1.org), the ombudsman for all of lower Manhattan, confirmed that this is one of three big issues challenging not only the residents and local business owners but, indeed, the very nature of Tribeca’s distinctive character.

According to Levine, there is concern that the neighborhood’s urban gentility is being threatened by large-scale developments bringing in an influx of residents, restaurateurs and retailers able to pay inflated prices. Consequently, services such as 24-hour delis, inexpensive, mom-and-pop restaurants, and dry cleaning are being shut out. “Meeting the demand for these day-to-day amenities has not kept pace with the rapid growth of Tribeca from a loft and light industrial neighborhood to expensive residences,” says Levine. He estimates that since the 2000 census, all of lower Manhattan’s population has nearly tripled to 90,000.

Francesca Mannarino-Werz, a senior associate broker in the Chelsea office of the Corcoran Group and a Tribeca resident for the past three years, says that “residential prices range between $800 to $1,000 per square-foot, depending upon the property.”

At the time this article was written, a three-bedroom duplex “Skyhome” at 101 Warren Street was listed for sale with The Sunshine Group at $16,350,000. According to sales materials for the building, its amenities include “a 1,669 square-foot, set-back wrap-around terrace clad in Ipe wood with transparent glass railings at the perimeter.” The tower lobby exhibits two original 9-x-12-foot Roy Lichtenstein tapestries and an abstract piece by celebrated New York sculptor Joel Shapiro.

Levine says the other big worry for Tribeca residents—and lower Manhattan residents in general—is the area’s lack of services like public schools, playgrounds, and libraries. “There are also very few services for seniors in Tribeca and the Financial District, with the exception of South Bridge Towers, which is in the Seaport neighborhood,” he notes.

Mannarino-Werz, the mother of a preschooler who has also worked in or around the neighborhood since 1996, says she took up residency partly on account of the very highly-rated P.S. 234 Independence School, one of the most sought-after in the city.

She adds that community services—especially those focusing on the needs and interests of teens—got a shot in the arm in Tribeca with the April 2008 opening of the new Manhattan Youth Downtown Community Center at 120 Warren Street. The new four-story, 28,000-square-foot facility has a special focus on young adults and teens, but its future programming plans are multi-generational.

And the area is gaining ground with the kinds of resources and amenities everyday neighborhood residents need—like grocery stores. Mannarino-Werz said she’s thrilled that a 55,000-square-foot Whole Foods grocery store is moving into 101 Warren, the tallest luxury condominium to have been built in Tribeca to date. Her current grocery shopping option is a less-than-pristine supermarket in Chelsea. The other commercial tenants at 101 Warren are Bed, Bath & Beyond and a Barnes & Noble bookstore.

Through its various incarnations as a fur trading post, a shipping hub, a manufacturing center, a haven for artists, and now a fast-developing luxury neighborhood, Tribeca has always etched out a distinct identity for itself. How that identity expresses itself next is a subject both of anticipation and concern for area residents and developers looking to cash in on the neighborhood’s cool cache. Whatever happens, it’s likely that Tribeca will continue to be the standard-bearer for what “downtown living” means in New York City.

Rob Seitz is a freelance writer and new contributor to The Cooperator.