Do not show again [X]
By Danielle Braff   2013 August Insurance 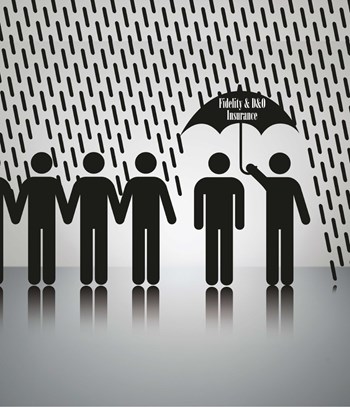 When you decide to run for a board, you’re usually thinking about all the great changes you’re going to make to your building, along with all the time and effort that you’re prepared to sacrifice for the good of your home.

Of the many thousands of dollars a large condominium, co-op, or homeowners association may spend each year on insurance, two policies that typically cost less than five percent of the total are two of the most vital: crime insurance (often called fidelity coverage) and directors and officers liability insurance (often called simply D&O).

It may sound like so much complicated small-print—but boards must understand what each type of policy covers and what they don’t cover.

First, there’s general liability coverage, which protects the association if someone is hurt on the property. This one is straightforward. But fidelity bond insurance and D&O insurance can seem more complicated to understand. Essentially, they are there to protect the board against lawsuits.

Fidelity bond insurance or crime insurance is typically a stand-alone policy or is included within a package policy that protects an association from any theft or misappropriation of funds by people entrusted to handle them. Essentially, says Edward Mackoul, president of Mackoul & Associates, an insurance brokerage firm with offices in Garden City, New York City and New Jersey. “It protects the board.”

It protects them against the theft of insured funds or business property. So if a building employee steals money, the insurance will cover them. That’s why it’s also known as crime insurance, says Michael Rubin, president of The Rubin Group, an insurance agency in New York City. Recently, he says, a building in New York hired a third-party manager to help with the building, but the manager they hired was stealing the building’s money.

“Now the building can’t meet their obligations, so the fidelity insurance company replaces that money,” Rubin says. “If you have elevator maintenance and roof repair and all of a sudden, the money is gone, the insurance covers that.”

Of course it’s possible to figure out who took the cash in the first place, to hire lawyers at that point and to hope that the money hasn’t been spent yet so your building could get it back. But in the meantime, the building’s bills will have gone unpaid and the entire building may go into foreclosure. Getting a good insurance plan is much easier and could be less costly in the end.

New Federal Housing Administration requirements now provide that condos must have this insurance—so not only must boards consider it—but they must research it, purchase it and renew it.

The first thing to understand is which type of buildings in New York are required to carry fidelity bond insurance. These requirements introduced in September 2012 stated that all new and established condominium projects with more than 20 units must now obtain and maintain employee dishonesty insurance coverage. The policy must cover all officers, directors and employees of the association including property managers of both co-ops and condos.

Even if fidelity coverage isn’t required for your condo or townhome, it’s strongly advised.

Know What You're Buying

In theory, every type of insurance does the same thing: protects its buyer from unexpected, unanticipated future losses. But even though D&O insurance sounds and looks similar to fidelity bond insurance—and often gets mingled together in the same sentence, they are two separate entities.

D&O coverage is necessary to protect boards from legal actions and damages resulting from their own good-faith decisions. “It’s not mandatory, but they’d have to be insane not to have it,” Mackoul says. “A co-op is a corporation, and they’re making decisions. Eventually, they’re going to make a decision that people aren’t happy with, and people are going to sue. They’re going to need D&O coverage.”

“It’s important for board members and other building administrators to have D & O coverage because of losses that could take place involving something other than bodily injury or property damage, which are specifically included under their liability policies,” says John E. Hardy, managing director of commercial insurance for Cook, Hall & Hyde, an insurance and risk management company based in Melville. “For example, errors in judgment as it relates to condominium or cooperative funds. Say they made a decision to buy fencing around the exterior of the property and they spent $10,000 dollars of the cooperative or condo’s money to do that only to find out they didn’t file for a permit or failed to get the appropriate notification of the local constituency. Now they have to take it down because they are not allowed to put one up. The way they would recoup that money would be a D&O policy.”

Depending on your particular building’s coverage (this can vary depending on what you request from your insurance agency), the D&O policy can protect again libel, slander, discrimination and other decisions the board makes regarding the operation of the association.

Some more specific scenarios it may cover could include: Failing to pay the HOA debts on time, improperly managing the board’s money which results in a monetary loss, continuing a wrongful practice even after discovering that it is wrong, making poor decisions based on advised judgment, being ignorant of HOA records and books, conflicts of interest, aiding and abetting in illegal actions of others, careless wrongdoing, poor oversight of employees and even willful wrongdoing.

The range can be vast, but some of the more common issues that D&O covers tend to be subletting issues, discrimination, noise and pets, Mackoul says.

Recently, a building in New York wanted to refinance their mortgage but the prior loan had a very significant prepayment penalty, Rubin says. The building’s board couldn’t avail themselves of their lower interest rate, and they had to pay the penalty. “That was an example of a bad decision made in good faith,” Rubin says. “The co-op and the condo are hurt by their bad decision. In that case, they brought an action, and the insurance company settled.”

Thus, D&O insurance is incredibly important—and having poor coverage can result in the loss of thousands— if not hundreds of thousands of dollars should something go wrong. While most of the policies are similar, the devil is in the details.

“D&O coverage is not all the same,” Mackoul says.” Some companies will allow you to obtain it as an endorsement to the general liability or package policy, but that’s not as broad as the stand-alone policy,” he says, suggesting that all boards thoroughly read through the terms of each policy before deciding on one—but always choosing the stand-alone policy because its coverage is more thorough.

Once you determine if you want or need coverage, it’s important to ask the insurance agencies for their definition of an insured employee, since this varies from one company to another. According to insurance experts some define this as a person who is paid a salary, while others may include people who are committee members.

Fidelity coverage is relatively inexpensive, says Mackoul. For $500, it’s possible to purchase a $100,000 bond, which the association is responsible for paying. It's important to make sure that the limit for the management firm is the same amount that the association is purchasing.

Hardy suggests the board ask their insurance agent what insurance companies they write for and what would they deem to be the appropriate limits of liability based on the size and component of the board itself, prior to purchasing a D& O policy.

Before agreeing to the policy, always ask to review a sample policy so you can go over the details and make sure this will include what’s necessary for your particular building.

One big issue would be third party liability, Rubin says. For example, if a minority vendor approaches your building and offers to clean it for 20 percent less than your current cleaning service—and your building declined his services, he could sue the building for discrimination.

That doesn’t mean that you need to overpay, nor does it mean that spending a couple hundred dollars will do the job. Rubin suggests getting four or five quotes before deciding on the right policy for the building.

There are a few other ways to keep costs down. Choose a higher deductible and your annual cost may go down, but you’ll end up paying more out of pocket if there is a lawsuit or legal action. The only other way to keep the cost of the insurance down is to not file claims unless absolutely necessary, he says.

Insurance experts believe that although your building has many different insurance policies, there’s nothing that requires you to buy the D&O insurance policy from the same insurance carrier that provides the rest of the policies.

There are several ways an insurance company determines the cost of your building’s policy. “They ask for an actual copy of the bylaws of the entity,” says Hardy. “They also need to know the structure of the board and they need to have a financial statement from the condominium unit.”

The last step before signing on the dotted line should be checking out the insurance companies’ ratings. This can be done at www.Ambest.com. If you’re looking for an insurance agency specializing in insuring boards and community associations, you can get more info by going to The Cooperator’s Official Directory of Co-op & Condo Services, which is located at http://directory.cooperator.com.

Danielle Braff is a freelance writer and a frequent contributor to The Cooperator. Staff writer Christy Smith-Sloman contributed to this article.