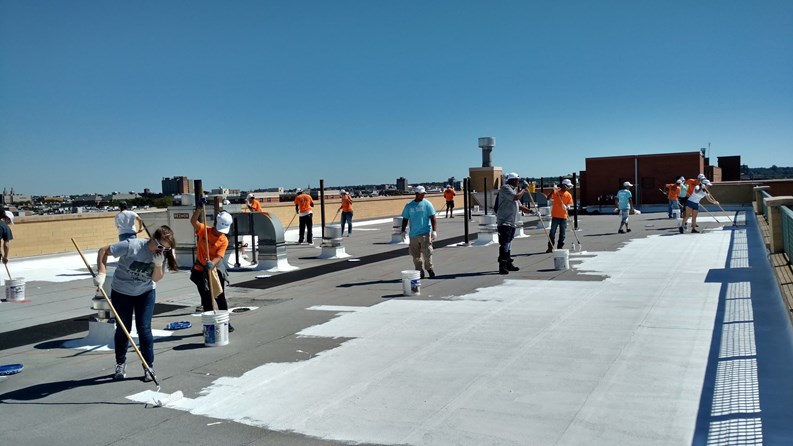 Seven years ago, an initiative called NYC Cool Roofs was launched under Mayor Michael R. Bloomberg's administration to cover as much of New York City’s rooftops as possible in a reflective white coating. It was meant to not only help cool down the city, as many roofing materials used in the Big Apple absorb heat, but also to cool down the buildings themselves. The Cool Roofs program, a project of the NYC Department of Small Business Services, continued under the de Blasio administration, and in 2014 it became part of a goal to reduce carbon emissions by 80 percent by 2050. Originally intended to cover 1 million square feet of rooftop, the white coating has now covered just over 6 million square feet.

But it’s not only the initiative that has been expanded and advanced—so has cool roof technology. “The cool roofs that they were doing during Bloomberg’s time were good, but they were just coatings,” says Christopher Anderson, vice president of CGC Restoration Inc., a professional contractor in Brooklyn, “while the cool roofs they have now are more like roof extenders. They do the same thing where it still reflects the sun’s rays, but they also extend the life of the roof.”

Anderson says he has been doing this type of installation now for nearly three years, but it’s not huge in New York yet. “It’s a lot bigger in the South. Now it’s starting to gain a little momentum as people realize what it can do at a cheaper rate. Instead of replacing your roof, you can go and put this coating on it to extend it for another 10-20 years.”

The advantages that the new system brings aren’t just environmental—they’re also structural. “You don’t have to put a new roof on; you can do both at the same time: the cool roof and a new roof,” says Anderson.

According to Anderson, you can put the new cool roofing on any type or slant of roof but shingles. “You could have just about any type of roof,” he explains, “so it can go over any type of membrane. It just changes the primer you would put down before the product. The only thing is if the roof is in bad shape you might need to do slight repairs to the parts of the roof that are damaged,” he says.

While you might want to do some repairs, you need not worry too much about a little standing water, Anderson says. “This is a seamless roofing system, so if the water is sitting on it you don’t have to worry about the water seeping into the roof.” But if you do want any dips taken care of, Anderson says putting down some insulation to get the right gradient would be enough. The only problem is that “it can’t be installed in the rain and you want to do it when it’s above 50 degrees. I would say you can install it anytime but the winter.”

Things You Should Know

There are some considerations when it comes to cool roofing. For starters, it’s not necessarily a short installation process. “I have a roof coming up that’s about 2,300 square feet and I figure it will take me about 15-20 days to do it,” says Anderson. (A representative from the NYC Department of Small Business Services said that the installation is quicker through the Cool Roofs program if the owner were to install a cool roof on their own for a building of that size).

Another thing to take note of: you’ll need a window of time during the summer when there is very little rain to get the job done. But as Anderson says, “It’s cheaper than a new roofing system but it can serve the same purpose as putting in a new system.”

So let's recap about cool roofing technology: it helps cool down your building and the city;extends the life of your roof; is structurally flexible to work around, and presents some cost savings. With these advantages, what more could you ask for?

To find out more about the NYC Cool Roofs initiative, click here.

John Zurz is a staff writer for The Cooperator and other publications.

Jennifer on Submetering Your Building's Electricity:
Did anyone respond to your question I am wondering the same thing.
William on Solar Power Gets a Boost from the City:
This unfunded mandate and costly fine program needs tweaking. The City should make consulting engineers available to multifamily buildings…
Dan Fast on Facade Problems Don't Go Away on Their Own:
The procrastination described in this article is typical of coops and condos. In the vast majority of cases the thinking is: never do today…
s SMITH on Facade Problems Don't Go Away on Their Own:
This is too funny. I wish our board would fix the huge cracks in the building's foundation that have persisted for over 10 years. Then, the…
CPina on Building Inspections:
If you live in a co-op sponsor by the NYC Housing Development, nobody cares about the buildings and their occupants until tragedy happens.…