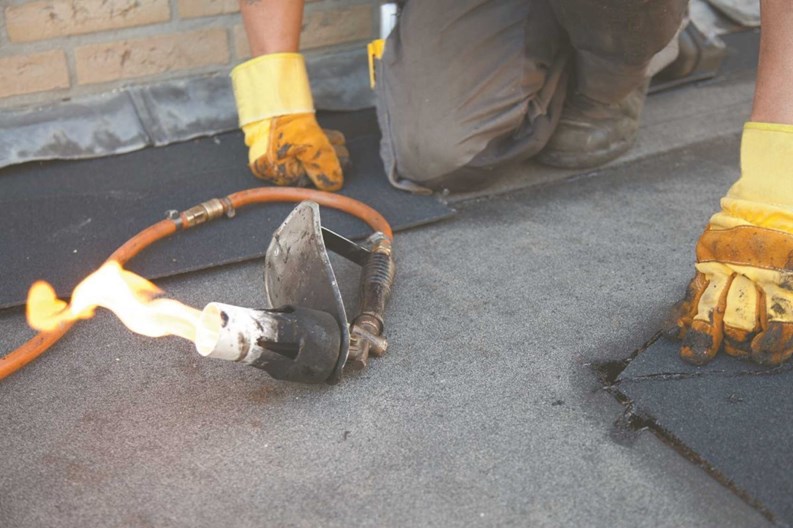 A residential building’s roof is its first line of defense against whatever the skies throw at it. Left  untreated, roof problems can proliferate and cause thousands of dollars in  damages to residents’ property, as well as the building itself. When it comes to the literal roof  over your head, “out-of-sight, out-of-mind” is definitely not the attitude to take—particularly once winter's bad weather has passed and left potential damage in  its wake.

In New York City, most residential roofs are flat roofs, which generally have  little to no slope. Flat roofs represent the most efficient use of urban space,  offer architectural freedom and energy savings, and control of the downflow of  water into the drainage system. They are considered an economical alternative  to the sloped roofs found on other residential structures, and are designed to  protect the building from moisture and other exterior elements, and to support  the mechanical and electrical equipment that serves the building.

Early flat roofs were designed using tar as a waterproof coating, but the uneven  surface often created problems with rainwater and snow-melt ponding in low  spots and causing leaks and other damage. Modern flat roofs use a continuous  membrane covering which can better resist pools of standing water. These  membranes are applied as a continuous sheet by utilizing sealants and adhesives  that allow for bonding multiple sheets and dealing with structures—pipes, skylights, exhaust vents, and so forth—that penetrate the roof surface and can become entry points for water.

Roofing is pretty simple, says Wayne Bellet of Manhattan-based Bellet  Construction Co. The roof consists of a membrane, into which are placed  protrusions like pipes, parapets and drain openings. Roofs are vulnerable, he  says, because they are exposed 365 days a year to weather—sunlight and ultraviolet rays, and most of all, moisture.

“There is one more ingredient that threatens the solvency of a roof, that being  foot traffic. And foot traffic can be intentional vandalism, like people trying  to deliberately harm the roof and then you have what I call accidental  vandalism, which is, for example, women who wear their stiletto high heels that  don't realize they are causing harm to the roof. People don't realize when they  bring their terrace chairs and tables that when they sit on them, they're  transferring 200 pounds of pressure into a softened asphaltic material that  could cause a leak.”

Drains need to flow freely and if they are clogged or blocked by debris, snow or  ice, leaks can form, he says.

As far as roofing technology has come in the last several decades, “Many property owners may not realize that the flat roofs that sit on top of  their buildings actually need quite a bit of attention and care to keep it free  from debris and leaks,” says Matt Riedel, owner of Riedel Roofing in Manhattan. “Over a period of time rain, wind and erosion will destroy any roof  waterproofing.”

That’s why conscientious maintenance and seasonal upkeep are crucial for keeping roof  structures sound and functional.

“You can’t inspect a roof surface when there is snow on it, so springtime is the best  time to hire an inspector to look,” Riedel says. “The most vulnerable points of a flat roof are the seams. A lot of roofs are EPDM  rubber, and the seams eventually start to degrade and peel open because of the  constant sunlight.”

According to Joshua J. Attanasio, senior project manager for Centimark  Corporation, all counter-flashing, metal work, equipment curb and supports,  pitch-pockets, caulking, grease guards, traps, and any other rooftop  accessories functioning in conjunction with the roofing system need to be  inspected in order to stay functional.

“Cracking and splitting of the asphalt roof systems are the most common types of  post-winter damage affecting New York City roofs,” says Attanasio. “You need to be concerned with penetrations, seams, flashings, terminations and  masonry.”

Thanks to the harsh winters that have hit the tri-state area over the last few  years, many roofs have experienced increased problems due to the heavy snow and  ice.

“If any cracks or abrasions have formed in your roof, when water seeps into them  and subsequently freezes, it will expand and cause those cracks or abrasions to  grow,” Attanasio says. “Preventing serious damage from snow and ice can be as simple as patching areas  of your roof that appear to be worn with a durable sealant.”

Bellet agrees. “The freeze-thaw cycle that the winter poses is the biggest challenge. If you  have an area of the roof that retains water for one reason or another, you'll  have a lot of forces that turn into slush and snow and ice that will affect the membrane that's beneath it. I would just visually  check the roofing membrane,” and associated roof components, he says.

Preventative maintenance is far more cost effective than full-scale repairs,  which is why one should always hire a professional to inspect and look for  problems as soon as the weather starts to warm up.

“Sometimes the roofs are older and are cracked in the first place and the ice  tends to work on the membranes and cracks them further,” Riedel says. “A lot of times the walls will have flashings ripped off due to the heavy winter  wind, or the roofing systems going up the wall will crack.”

Attanasio recommends having your roof inspected at minimum two times a year, and  while your building super can and should make periodic checks of the roof for  obvious damage, these in-depth, twice-yearly examinations should always be done  by a professional.

“Inspectors look for anything and everything that can be problematic,” he says. “Our company provides free roof evaluations, which includes investigation of  masonry concerns. Every project is different—if we are doing Local Law 11 inspections for example, the fee range depends on a  number of logistical concerns.”

While some building managers may be surprised that Local Law 11 factors into all  this, Attanasio explains that it’s not always necessary and only matters in extreme circumstances. “Local Law 11 relates to potential fall hazards from the masonry on the exterior.  It typically does not relate to concerns of the roof unless degraded internal  parapet walls start affecting the masonry on the exterior,” he says. “This may lead to rebuilding the wall, which would certainly affect the roof  area.”

One of the more serious problems that one can encounter on the roof involves  ponding, which is water standing on the roof for more than 48 hours.

Because they lack pitch, flat roofs don’t really shed water naturally. They need the gutters and drains in order to get  the water off, and if the gutters and drains get clogged, then water will  accumulate on the roof and cause problems. Moisture damage in your roof is  cumulative and the longer moisture is allowed to collect or seep through your  roof, the more damage it does and the more expensive repairs will be. That's why it's so vital that building roofs remain free and clear of debris.

If residents are leaving bottles or other garbage on the roof, it's only a  matter of time before a bit of debris obstructs a gutter or drain, causing  water to back up and leak into the building. If residents are allowed onto the  roof at all, water exit-points must be kept clear, and both residents and  building staff must be vigilant in enforcing that.

On Top of Things

Most roofing companies charge in the neighborhood of $75 to $150 per hour to  inspect a New York City co-op or condo roof—which is a bargain compared to the cost of damage an overlooked roof ailment can  cause.

The nominal cost also highlights the importance of having a professional  inspection, rather than relying on the building super or handyman to make a  thorough, accurate assessment. “A lot of these buildings will send a handyman up to look, and they don’t know anything about roofing,” says Riedel. “Their only weapon is a bucket of cement, and they can screw more things up than  they can fix. Would you go to me to fix your teeth if I just put up a shingle  and said I was a dentist? Of course not.

Riedel has seen numerous cases of people trying to fix problems by plopping a  coat of tar over the cracks and splits in their roof membrane, and while this  may seem to work as a temporary solution, in 3 to 6 months, the tar will peel  and the problem will still be there—and may in fact be worse.

“We can do infrared scans for moisture, and there are other things that a  professional can look at and understand that people who aren't qualified just  can’t,” Riedel says. “We are looking for buckling, cracking, peeling, holes, flashings that are off  the building, tar that is breaking open. You also have to look for debris up on  the roof and drains clogging things.”

If your building has a so-called 'green' roof—one planted with vegetation designed to absorb rainfall and improve energy  efficiency—there aren’t as many issues that come into play when springtime comes around. Maintenance  concerns for green roofs include replacing any plants that may have died over  the winter and just checking for debris and some of the same concerns of a  normal roof.

“There is very little maintenance needed as long as the green roof is installed  correctly in the first place,” Riedel says, “because the green roofing protects the membrane underneath. They do need to be  professionally built; you don’t want to just throw on a roof and put some dirt and stuff on top of it.” Overloading, improper drainage, damage caused by tools, foot traffic, and plant  roots are all considerations that a professional will take into account when  designing and installing a green roof project.

Roof neglect is a big problem in residential buildings, but not taking proper  care of them can result in some serious problems down the road.

“People need to be mindful of their surroundings and not take for granted that  the roof can be damaged if handled improperly,” Attanasio says.”Hire a professional and stop any problems before they happen.”

Keith Loria is a freelance writer and reporter and frequent contributor to The  Cooperator.