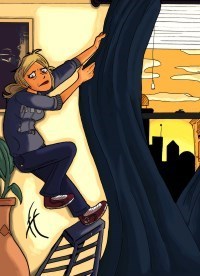 Every once in a while, one hears about a co-op or condo that has been neglected for some time and has some problems in its common areas. Dirt builds up on the lobby floor, the fluorescent lights on the ceiling flicker, paint is chipped from some of the hallway walls, and perhaps the small outdoor garden is overgrown.

If the building is short of cash, resident experts—designers, electricians, engineers, contractors, gardeners, even real estate brokers—who happen to live in the building, or who are friends of those residents, may suddenly present themselves. They say they can either do the job for free or for a very low fee, as a favor to the building.

Should the management company or the board take advantage of "in-house" talent and bypass the regular process of bidding out the job or calling in their usual vendor or service provider?

Most experts say no—"don't do it yourself," even if the person offering their help is a licensed professional. The reasons take into account a variety of factors, such as insurance, legal requirements, liability, guarantees, and even community harmony.

What are some typical scenarios in which a board might consider a do-it-yourself type of approach, at least in a common-space environment?

According to most observers, one of the most common examples involves renovations to the lobby, in a case where either a contractor or a designer lives in the building. However, the "do-it-yourself" scenario can arise for almost anything, even, as we'll see, for a non-capital item such as legal or brokerage services.

"Any time I find that a board uses a person in the building [for a service], you get into a conflict," says Steven Gold of the Hudson View Associates management firm in Manhattan (not to be confused with the Hudson View Gardens apartment complex in upper Washington Heights). If something goes wrong, the board members will still have to see that person on a regular basis, and it may prove uncomfortable. However, Gold does say that obtaining materials (as opposed to services) through a building resident who has connections doesn't necessarily have to be a problem.

A piece of work or a deal gone bad, if approved by the board, could also backfire, says Manhattan attorney C. Jaye Berger, a principal of the Law Offices of C. Jaye Berger, a firm specializing in building construction, real estate and co-op and condo law. She calls this type of arrangement "work done on a friendly basis." The appearance of impropriety should be assiduously avoided. And once problems arise, she says, shareholders may say, "Oh, the board president got us into trouble."

Also, if the contractor or designer is a friend, the board might be reluctant to fire him or her if the work turns out to be unsatisfactory. This could also turn into an unpleasant situation.

John Marino is president of JMPB Renovations in Manhattan, which specializes in hallway and lobby renovations. Marino lists some of the problems that could happen if the board decides to adopt a do-it-yourself approach, either using a personal contact or using existing staff where experts are needed:

• The in-house staff cannot perform the work expeditiously because of other building responsibilities.

• Those who perform the work may not be licensed professionals.

• Insurance and code compliance may not be met, which, among other things, can void warranties on various materials.

• An in-house designer may have had little or no experience doing a hallway or lobby project, even though he or she is experienced in other types of projects, such as private residences.

Insurance, says Berger, is certainly an important consideration. Obviously, you don't want someone who doesn't have insurance doing anything that could harm someone or damage any property, however minor. But even if the contractor or other individual who is doing work "on a friendly basis" has insurance, you definitely need a contract that requires the insurance, she says. "It's the contract that makes it happen."

In a related matter, Margie Russell, executive director of the New York Association of Realty Managers (NYARM), says that not only a "resident expert," but a board member who oversteps his or her bounds can get the board in trouble when it comes to giving jobs to residents or handling them in-house.

"If someone on the board takes on overseeing a project in their committee role, they should make sure that they don't trade their board role for a professional role - they may not be in tune with all codes and nuances involved in the job.

"If he says, 'We don't need a construction manager to supervise the contractors,' and decides to do that for him or herself, he's crossed a line."

What They Need to Comply

Marino outlines what outside contractors and vendors have to have covered to comply with state and city law:

• Insurance, usually with a minimum of $1 million liability—sometimes upwards of $5 million.

• Applicable licenses (in the case of a professional such as an electrician).

• Proper permits (depending on the job scope).

Also, remember that if you accept a resident's friendly offer, and that person turns out to be unqualified or makes so many mistakes that the job has to be done over, you're not saving the money you thought you would. Instead, the situation is liable to cost you more money when you have to fix the work or clean up a legal mess.

This is an important point, because most boards or managers that accept offers of work from "resident experts" do it to save money in the first place.

And in the event that a board or a manager goes against the advice of all these experts and does accept a resident's or friend's offer to do it him or her self, it's absolutely crucial to have the board's insurance broker and attorney watch the situation closely, says Russell.

Two of the experts interviewed for this article gave some examples of what could happen when the board accepts do-it-yourself help from a resident, or decides to assign work that should be done by experts to regular staff.

Both concern not the usual type of example—construction, renovation or design work in common areas—but other fields, showing that the rule of "don't do it yourself" is applicable to just about all situations.

Gold tells of a building in which the board decided to use the services of a resident, who was also a real estate broker. Eventually, the broker steered people to the building that didn't really belong there because he was eager to get his commission, as soon as possible.

The other comes from Josh Goldman, president of Bargold Storage Systems in Long Island City, a company that provides storage lockers and modules for apartment buildings and complexes. One large co-op complex, Goldman says, bought the storage units from his company, but then tried to run the storage itself using its regular staff. Because the staff members already had so many other duties, "They lost control of who had what unit, and they weren't collecting the rent." In the end, he says, they invited Bargold back in.

While sometimes the wisdom in not having residents or in-house staff tackle projects in your building lies more in avoiding minor-but-irritating mishaps, the fact is that in the end, any mistakes they make may cost you more than if you'd simply hired professionals from the start.

Raanan Geberer is a freelance writer living in New York City and a frequent contributor to The Cooperator.