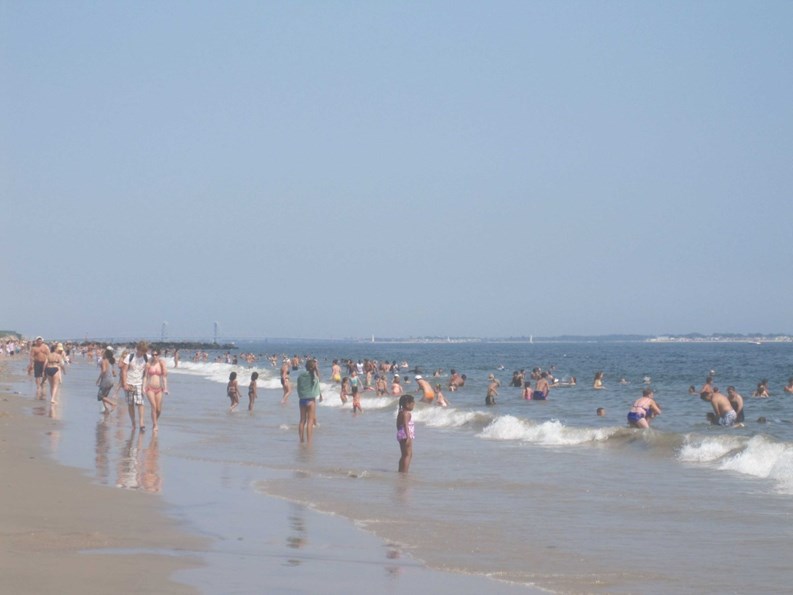 You’ll find knishes, borscht, blinis, loads of shops, bakeries, fruits and  vegetables, black market caviar and of course, vodka, along Brighton Beach  Avenue, the neighborhood’s main artery that caters to a thriving Russian community. Day trippers from the  five boroughs also make the trek (especially during the summer months) to this  Brooklyn neighborhood along the Atlantic Ocean and nearby Coney Island’s amusement park.

Brighton Beach is bounded by Coney Island at Ocean Parkway to the west,  Manhattan Beach at Corbin Place to the east, Gravesend at the Belt Parkway to  the north and the Atlantic Ocean to the south.

Brighton Beach was founded by real estate developer William A. Engeman and named  by Henry C. Murphy along with a group of entrepreneurs in an 1878 contest. The name was chosen because it evoked the memories of the English resort  Brighton.

The center of Brighton Beach was Hotel Brighton, located at what now is the foot  of Coney Island Avenue that was owned by Engeman. The hotel was popular with  Manhattanites because it was easily reached from New York City via the Brooklyn  Flatbush and Coney Island Railway, and distant enough to suggest a vacation.

In 1883, William “Buffalo Bill” Cody galloped into Manhattan Beach with his re-creation of the cowboy life—complete with a band of Sioux Indians, Oklahoma cowgirls and Chief Bull Bear of  the Cheyennes. Crowds flocked to see his show. In addition to Buffalo Bill’s show two vaudeville theaters presented various types of entertainment and The  New Brighton Theatre promoted itself as being “the handsomest seaside theatre in the world.”

When the New York Legislature passed the Hart-Agnew law in 1908 which banned  gambling in New York state things began to change in Brighton Beach. The Brighton Beach Race Course, a thriving business, closed its doors. Then ten  years later a massive fire destroyed the bathhouse and most of the attractions  along the pike.

During the years just before and after The Great Depression, the neighborhood  attracted many first and second generation Jewish Americans where they went on  to develop a rich cultural and religious presence. Their presence led to the conversion of the Brighton Beach Music Hall into a  Yiddish Theater in 1918. The theater would house a stock company and present  new plays, primarily musical comedies starring the best-known Yiddish actors in  America.

In the 1920s a real estate developer built bungalows on site of the old  racetrack and on the ocean front but with the extension of the Boardwalk land  became too valuable for single-family housing so apartment house development  began and shortly after Brighton Beach grew into a year-round neighborhood of  families. In the 1930s and 1940s’ a huge influx of Jewish immigrants escaping fascism and Nazis arrived from  Europe and landed in the area. This time period would provide the back drop for  the Neil Simon play “Brighton Beach Memoirs,” which told the story of a fifteen year-old teenager coming of age in 1937  Brighton Beach. Throughout the 1950s and 1960s families migrated to the suburbs  and the neighborhood became more elderly and impoverished and many homes were  converted into single-room-occupancy dwellings for welfare families and  patients released from mental institutions while many abandoned buildings were  burned.

In the 1970s the streets of Brighton Beach were lined with empty storefronts and  dilapidated buildings but with the relaxation of the Soviet Union’s immigration policies thousands of Soviet Jews from the Ukraine settled into  the area. When Russian immigrants began arriving and opening shops the area  began to once again thrive and the neighborhood became known as “Little Odessa” after the port city on the Black Sea.

In 2006, Alec Brook-Krasny was elected for the 46th District of the New York  State Assembly becoming the first elected Soviet-born Jewish politician from  Brighton Beach.

Today, the area continues to have a large community of Jewish immigrants, who  left the former Soviet Union as well as a large number of concentration camp  survivors. As of 2011 of the estimated 55,000 Holocaust survivors living in New  York City, most live in Brighton Beach.

The neighborhood is also a popular film destination. More recently, it has been  used as a setting for New York television shows such as Law & Order, Blue Bloods, and Person of Interest. In August 2011, a reality TV  series, Russian Dolls, followed the lives of eight women living in the  community.