Do not show again [X]
By Hannah Fons   2009 August Insurance 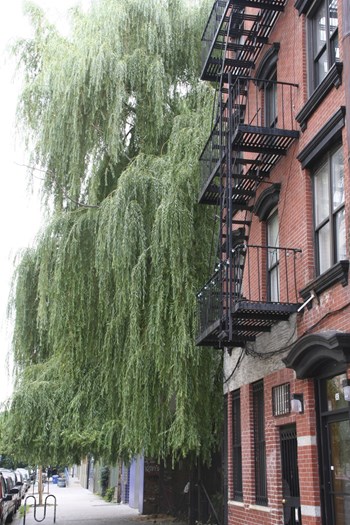 While the grid of streets and avenues may remain rigid and unchanging as the  years go by, New York City’s neighborhoods are organic entities, constantly shifting and evolving as new  features emerge and old ones fade away. Nowhere is this perpetual reinvention  more evident than in Manhattan’s East Village.

Bordered by Houston Street to the south, Third Avenue and/or the Bowery to the  west, the East River to the east, and 14th Street to the north, the East  Village was originally considered—and still is, by some—to be part of the Lower East Side. Some native residents still proudly claim  Alphabet City as their home turf, and in the parlance of real estate brokers  and retailers, other parts now fall under the name NoHo.

Whatever the name, the East Village has become synonymous with artists, dive  bars, indie boutiques, sidewalk cafes, and a louche hipster aesthetic that has  managed—in some ways, at least—to resist much of the homogenization afflicting the rest of Manhattan, though  now even that is changing.

Prior to the founding of New Amsterdam by Dutch traders in the 1600s, the part  of Manhattan that would eventually become the East Village was an expanse of  swampy marshland crisscrossed with Native American paths and game trails. (Many  of these were made permanent thoroughfares—including the largest, which became the Bowery.)

Most of what became the East Village was originally part of a sprawling farm  owned by Peter Stuyvesant, the last Dutch governor of New Amsterdam. The area  began to change from pastoral countryside to status address when Americanized  fur-baron-turned-real-estate-mogul John Jacob Astor set himself up in luxurious  style near what is now called Astor Place. According to the East Village  Visitor Center, “By the 1830s, [Astor] was selling real estate in the Astor Place area to some of  the wealthiest politicians, merchants and industrialists of the era, including  Vanderbilt, Delano and Gardiner. It became one of the most fashionable  addresses in America.”

Eventually however, successive waves of poorer immigrants from Europe—particularly Eastern Europe, and especially Germany—made the area less appealing to society types. According to Visitor Center  literature, “Many local estate owners started selling off their lots to tenement developers,  and the area’s working-class roots began to take hold.”

“Working class” might have been something of a euphemism in those days. By the time the Civil  War ended, the entire area from Houston to 14th Street was a teeming slum,  populated with thousands of families crammed into airless tenement buildings  and working punishing hours under miserable conditions in nearby garment  factories, slaughterhouses, and tanneries.

In fact, it was the slums and inhumane working conditions imposed upon the  residents of the East Village in the late 19th century that first established  the neighborhood as a staging ground for grassroots social movements. Since the  1850s, residents have gathered (and occasionally rioted) in and around Tompkins  Square Park to strike back against hunger, unemployment, the draft, the  government, various wars, curfews, and other social injustices. Police have  been regularly dispatched—with varying levels of success—to break up angry mobs and protests in the park and surrounding streets.

The East Village’s reputation as a haven for counterculture has also drawn some of the most  influential artists, musicians, and writers of their respective generations to  the neighborhood, including W.H. Auden, Allan Ginsberg, Keith Haring, Madonna,  Charlie Parker, Lou Reed, and Andy Warhol, just to name a few. According to the  Visitor Center, in the early 1950s, the East Village was home base of the Beat  poet-writers—Ginsberg, Jack Kerouac, and William S. Burroughs, among others—as well as the emerging abstract expressionism school of painting and visual  art.

In addition to literature and art, music has long been a major export of the  East Village. During the recession-blighted days of the 1970s and 80s, the  neighborhood’s crumbling buildings offered emerging artists cheap space to create and  perform. Some legit venues, such as the legendary rock club CBGB & OMFUG on the Bowery, became world-renowned landmarks. The neighborhood is  widely regarded as a cradle of the East Coast punk-rock culture of the late  1970s, and of New Wave in the ‘80s. Local groups like Blondie and the Velvet Underground changed the face of  pop music, and even Madonna got her start here, working as a coat-check girl at  the Pyramid Club on Avenue A in the early 1980s.

Today, the last echoes of the punk scene are to be found on just a few blocks of  St. Marks Place, where groups of post-punk kids, nostalgic for an era that  ended before they were born, congregate on stoops and in down-market tattoo  shops, eyeing the tourists with disdain. Some of the original punk ethos  prevails in the handful of communal squats still hanging on in the neighborhood’s few abandoned buildings, but these have dwindled as the real estate boom has  consumed every square-foot of undeveloped ground.

Throughout its history, the East Village has been home to an ever-shifting cast  of residents: Germans and Irish in the early 1900s, Eastern European Jews and  Ukrainians after that, then an influx of Puerto Ricans in the latter half of  the 20th century. In between, millions of people from every corner of the world  and every socioeconomic niche have come and gone.

Most recently, gentrification has altered the face of the neighborhood almost  beyond recognition as the gritty, hardscrabble place it once was. The Wall  Street glory days of the early-to-mid 2000s affected the area profoundly,  according to Don Ortiz, a vice president with Prudential Douglas Elliman, who  specializes in East Village properties. “The East Village boom was a natural extension of the [West] Village boom. It  brought in a lot of young professionals and families.”

As the neighborhood evolved, Ortiz continues, “Originally, the typical [apartment buyer’s] profile was a young freelancer—many of them were renters who moved to the neighborhood because of relatively  inexpensive housing stock. The charm of old New York wasn’t lost in the East Village. There was a very much established restaurant scene  in the area, and people liked the fact that there was a neighborhood feel to it  without the typical big box retailers very common in most Manhattan  neighborhoods. Once there, they chose to buy as their incomes were established.”

Today, brand-new, glass-walled condos have been shoehorned in among the old  tenements, and an apartment that might have rented in the mid-1970s or early ‘80s for $250 a month or less goes for something closer to $1,250—and often much higher. According to Ortiz, one-bedroom apartments in doorman  buildings can sell for $600,000 on average. A two-bedroom apartment on a  tree-lined block of East 10th Street across from Tompkins Square Park could  easily sell for over $1 million, much to the amusement (or chagrin) of the  old-timers.

And new developments continue to sprout, despite the current recession—albeit with a distinctive East Village twist. For his part, Ortiz says he’s excited about new buildings like 311 East 11th Street, which is being built  from the ground up with green technology and environmentally-friendly  materials. “There is more and more landmarking in the area,” Ortiz says, “and there has also been a big push to continue the fight against the ‘upzoning’ of the neighborhood, and to preserve its low-density atmosphere” by limiting the number of stories allowed to new buildings.

While some lifelong residents grumble about—and occasionally protest outright—the development of the East Village, some improvements cannot be denied. Elin  Wilder is a native New Yorker who moved to the neighborhood in 1976—lured by the lifestyle she saw reflected in the pages of Punk magazine. Having  witnessed the East Village at some of its lowest ebbs, she’s not necessarily anti-gentrification.

“One of the pros [of gentrification] is that the police department actually shows  up when you call them,” says Wilder dryly. “They used to be more ‘selective’ about which calls they answered.”

Tompkins Square Park, once nearly bulldozed by the city for being a crime-ridden  urban nightmare, is now the focal point of the neighborhood. Today it includes  a children’s wading pool, a performance space, lawns for sunbathing, and the first official  dog run in the city, complete with different sections for big and little dogs.

“Everyone owes a big thanks to Harry Greenberg [the official “Keeper of the Park”…Editor’s note] and the Parks Department for their ongoing support and continued  upgrading of Tompkins Square Park,” says Wilder. “It’s a far cry from the needle park shantytown it once was—and we all need to do what we can to make sure it stays that way.”

Tompkins Square isn’t the only green space in the neighborhood—the abandoned lots that once were home to weeds, crack vials and other signs of  blight have largely been converted into lush, thriving community gardens—more than 50 of them at last count. Maintained by volunteer gardeners and nearly  all open to the public, the gardens vary from whimsical, child-friendly spaces  to gracious, meticulously tended urban oases, and all are protected from  development by the city’s Community Garden Trust. The trust was established purely to preserve and  protect New York City’s 650-plus community gardens, and the gardens in the East Village are some of  the city’s most beautiful and beloved.

But upgrades aside, few would argue that the East Village is not quite the place  it once was. Today, St. Marks Place is a hodgepodge of Japanese noodle shops  and cheap souvenir vendors. Legendary clubs like the Electric Circus and the  Saint are long gone, their footprints now occupied by chain hair salons and  bank branches. The Beat poets are extinct—replaced by well-scrubbed young professionals with baby carriages and small  dogs.

“We’ve lost so many local businesses and community members who simply couldn’t afford to stay,” says Wilder. “Just think, the Filmore East is now a bank, the Second Avenue Deli is now a  bank, our favorite midnight knish place is now a bank—there definitely seems to be a pattern emerging!”

“I really miss seeing the drag queens at the Second Avenue laundromat on Sunday  mornings,” Wilder continues. “You’d be there, hung over in dark glasses and they’d be dressed like they were ready for their close-ups! It was like a fashion show every single weekend. And CBGB’s the night of the ‘77 blackout—thank god for Hilly! [Kristal, the late owner of the bar.] It was wild in the  streets that night, and when most places were shutting locals out, he let us  come in and spend the night. He was a really great guy.”

CBGB closed in October of 2006, and Hilly Kristal died in August of 2007.  Shortly after his passing, the space that housed his legendary venue was gut  renovated and is now a John Varvatos clothing store. While it’s foolish to romanticize rampant poverty, burned-out buildings, and unchecked  crime, not all the changes in the neighborhood necessarily feel like  improvements. Many New Yorkers (including this reporter) feel a great sense of  nostalgia for the East Village of the past, where artists, musicians and  writers could afford to live and work, enriching the cultural fabric of the  entire city.

“Some of the people who have moved in over the past few years can be  exasperating,” says Wilder. “They’re kind of like urban locusts—they seem to destroy all the things that made the area special. They often don’t support local businesses, preferring Starbucks to the local coffee shop, or  they don’t make the connection between ordering from Fresh Direct and the loss of a  corner bodega. Local residents fought to make this area both cool and livable—and it won’t stay that way without sustained effort.”

Hannah Fons is associate editor of The Cooperator—and a resident of the East Village.