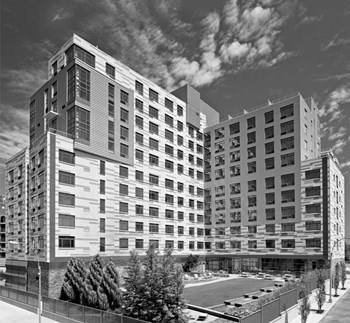 There was a time when Long Island City’s waterfront area wasn’t exactly a hot residential neighborhood. With its looming industrial buildings  with a few small residential buildings thrown together near the East River, the  area was more On the Waterfront than Sex and the City.

Today, that has most definitely changed. Long Island City is thriving with condo  buildings, stores and restaurants. According to Eric Benaim, a realtor who  specializes in Long Island City properties and who also lives in the area,  people from Manhattan are being drawn there for value and proximity to  Manhattan.

“I think it is the best location,” says Benaim, who opened his own agency, Modern Spaces, in Long Island City last  year. “A lot of people—Manhattanites— think it’s Queens, and the only experience they have with Queens is going through it to  go to the airport. Then they take the 7 train or the E or V train, and they see  it’s literally one stop. Four or five minutes on the subway line, and you’re in a real peaceful, quiet area, and you still have a lot of the amenities  that Manhattan buildings offer.”

According to the Greater Astoria Historical Society’s website, Long Island City is the largest community in Queens, with some  250,000 residents. Algonquin Native Americans lived there until Dutch farmers,  drawn by its fertile land, settled there in the 1860s. In 1839, a village was  founded by Steven Halsey at Hallet’s Cove, and ferry service to Manhattan started shortly thereafter. In 1870, Long  Island City was consolidated from the village of Astoria and several hamlets,  including Ravenswood, Hunters Point, Blissville, Sunnyside, Dutch Kills,  Steinway, Bowery Bay and Middletown. Long Island City was its own city (hence,  Long Island City) until it became part of New York City in 1898.

The construction of a Long Island Rail Road Terminal at Hunters Point in 1861  led to the area becoming an industrial center during the Civil War. Industry  grew through the consolidation of Long Island City, with gas plants and  factories built along the East River. According to the historical society, Long  Island City had the highest concentration of industry in the U.S. by the end of  the 19th century.

Marcia Bent on Manhattan's Crown Jewel-Keepers:
To the Central Park Conservatory Thank you for keeping Central Park beautiful for all of us to enjoy. The Central Park grounds are so well…
Anonymous on Understanding What You Use Helps to Conserve:
The con Edison bill is too damn high especially for one bedroom..con Edison surcharge are likely higher then the regular monthly bills itsel…
RD on Affordable Living in Chelsea:
Reside at Penn South and it is a bastion of cronyism. The management office employees including the prior manager held positions on the boa…
ALLAN NOTTINGHAM on The Largest Cooperative in Queens:
I live in this coop in 1978 , then move but was very happy, and will be happy if I do move back , will still like this place of home
Chandler on East Flatbush Co-op Mired in Legal Drama Receives $11M Loan: Report:
Who was the attorney who represented Marcella Coma?