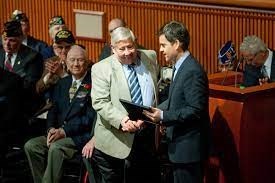 CooperatorNews regrets to report the passing of Walter Mankoff, 91, who served for nearly half a century on the board of the Mutual Redevelopment Houses, otherwise known as Penn South, in the Chelsea neighborhood of Manhattan.

Mankoff was legendary in the world of cooperative housing, beginning his professional career as an economist for the International Ladies’ Garment Workers’ Union (ILGWU), which went on to sponsor limited-equity cooperative housing projects throughout New York City—including Penn South, where Mankoff moved with his mother in 1971. After a couple of years in the U.S. Army, he went on to work at the ILGWU for another 43 years before retiring in 1996.

In the intervening years, Mankoff contributed his fierce intellect and generous spirit to several municipal and community organizations, including the New York Advisory Council on Employment and Unemployment Insurance, the New York City Business Relocation Assistance Corporation, the Census Bureau and the Bureau of Labor Statistics, the National Academy of Social Insurance, and Manhattan Community Board 4.

But it is his service to his own community at Penn South and the extended Coordinating Council of Cooperatives (CCC) member communities that arguably has had the greatest impact on the more than 20,000 New Yorkers who live there. At the announcement of his passing, members of the various boards, as well as property managers, vendors, service professionals, and individual shareholders, shared their sentiments and memories of the man who has come to represent the very best of cooperative living to all who knew him. A selection follows.

“The thing I always remember about Walter is that he was legendary with the attorneys at Szold & Brandwen ... due to his incredible intelligence. He was always kind and respectful to me and I laugh at the fact that he was so old when we first met 30 years ago, when he was my current age. While my perspective as to age has certainly changed, the deep respect I have for Walter and which was richly deserved has not.”

“Walter just seemed to know everything. Any time he responded to my questions, he always explained it so I would completely understand. He was such an integral part of CCC that it will be hard to go on without him. I am deeply saddened.”

“Walter was an inspiring presence at CCC and in the larger community. We will need to work hard to carry on his work.”

“Walter ... was a gentle giant, very knowledgeable and a sweet man. Walters’s many presentations throughout the years at the CCC were memorable. He will certainly be missed by everyone. He touched everyone he met.”

“It was always a privilege, over many years, to work with Walter, and also a pleasure—usually—as Walter did not suffer fools lightly and knew how to set things on the right course. His ability to assemble and process complex financial and economic data and to then present it in an understandable and useful fashion was unparalleled. He was a foundational member of the Penn South community and the cooperative movement in New York City. We grieve his loss, personally and professionally.”

“... Walter must have been at City Hall dozens and dozens of times advocating for all of us and especially his co-op. Whether it was in favor or opposition to proposed legislation, budget funding, or extending Penn South’s commitment to middle income housing, I cannot remember a meeting that wasn’t attended by Walter. He was a totally respected voice of reason that always looked out for our cooperative way of life. He will be greatly missed.”

“Through Penn South, the CCC, and the Community Board, Walter was the consummate community person. His career with the ILGWU was of a piece with his volunteer labors. He was on the side of right, and presented organized facts in support. ... For those of us who seek to serve our communities, Walter offers a model we can aspire to. Walter will be missed, he is missed already.”

“Walter has been a wonderful friend to Queensview. He was always willing to share information.  ... I am so grateful for all Walter did to help anyone who needed his help.”

“A friend to so many of us and to so many more who are not even aware of the significance he has had on their lives, Walter Mankoff will be sorely missed. Thank you so much for all of you have done, Walter.”

Thank you to the Penn South board of directors for providing information about Walter Mankoff’s life well lived. They advise that per Walter’s wishes, there will not be a funeral. If you would like to make a donation to a charity in Walter’s name, please contact the executor of his estate, Brian Raphan, Esq., at (212) 268-8200.