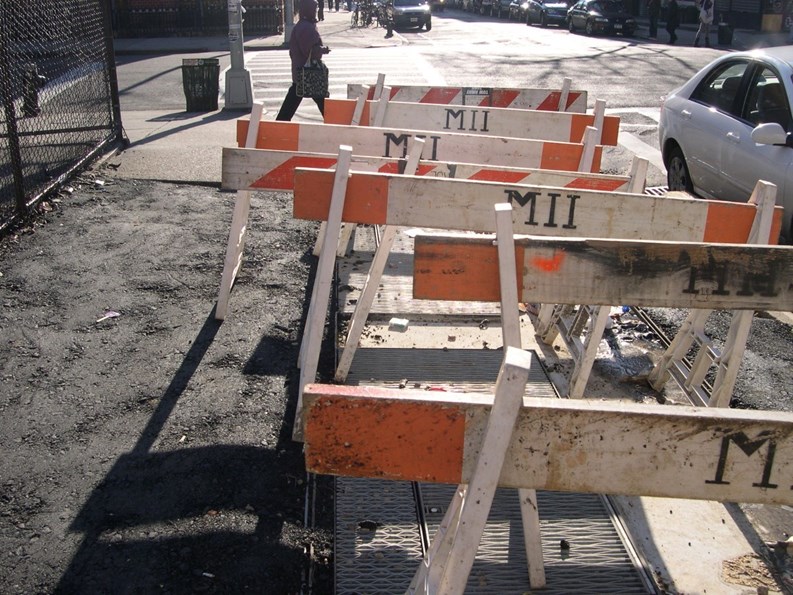 As a child, we tried diligently to avoid stepping on the cracks in the sidewalk, because, after all, our mother's backs were hanging in the balance. As adults, we simply take sidewalks for granted, often not looking down and watching where we are going, until we catch our foot in a split sidewalk and are sent tumbling to the ground.

But not only are buckling, cracked and uneven sidewalks a potential cause of injury and liability for us and our buildings, they're also an eyesore, detracting from the aesthetic beauty and curb appeal of even the most beautiful architectural facades.

Foot traffic, erratic weather, tree roots, and other factors all contribute to the gradual deterioration of the city's sidewalks. Given that New York City has thousands of miles of sidewalks (over 12,000 miles to be exact), sidewalk maintenance is—and should be—serious business. Sidewalks need occasional TLC, just like any other building feature, but before you learn how to take care of them, you really need a lesson in Sidewalks 101.

According to the New York City Department of Transportation (DOT), about 90 percent of the city's sidewalks are concrete."The standard specification requires a 3,200 PSI mix," says Craig Chin, assistant press secretary at the DOT's office of public information, "but bluestone, granite, bricks and pavers also exist."

But we're in New York City, where even concrete can be given a little extra something to make it look a little more fabulous. If you're planning a visit to Times Square, don't just look up at the skyscrapers—take a look down at your feet and notice how the cement glitters and sparkles.

"An aggregate was added to the mix," says Chin. "The name of the additive is Carbon Sparkling.This material costs around $90 per 50 lb. bag, and it's added to the concrete mix before the pour."

With or without sparklies, sidewalks are no longer limited to drab shades of gray anymore—masonry experts can now experiment in color too. "Most concrete naturally cures to a grayish white color, but we can alsotintthe concrete by addingdye to the mix," says Mike Bavaro Jr. of City & County Paving Corp. in Whitestone. However, he's quick to point out that adding these elementsto a stretch of sidewalk willenhance the look but alsoaddcost to the job.

Like most items we use regularly—such as furniture, cars and clothes—sidewalks can break down from normal wear-and-tear. But as Chin explains, there are several other factors that can cause sidewalks to deteriorate, including a poor sub-base, undermining caused by erosion, poorly restored utility cuts, tree root growth, shoddy initial construction, and the expansion and contraction caused by weather.

"During the freeze-and-thaw cycles here in the Northeast, concrete will heave when the ground freezes underneath it, this can push up a slab which may not settle back down into place during thaw," explains Bavaro. "This type of stress to the slab can also cause it to crack. Tree roots growing under a sidewalk can also cause the same type of heaving and cracking. Maintaining the sealant at expansion joints will help keep water from getting under the slabsandhelp to minimize heaving and cracking."

In most cases, problems with a sidewalk are apparent upon inspection; you can often tell if a sidewalk wasn't laid properly simply by looking at it. Chin explains that it's relatively easy to see if a half-inch vertical trip hazard is left between two flags, if there's not an expansion joint every 20 feet, if expansion joints are missing, if there is a poor finish, an incorrect pitch sloping back towards the building line, or cracking. These are all signs of sub-par sidewalks.

Repairing and replacing the sidewalk in front of a busy residential building is somewhat harder than diagnosing a problem. It takes time, money and permits.

"Under section 2904 of the New York City Charter and Section 19-152 of the City Administrative Code, property owners are responsible for repairing and maintaining sidewalks adjoining their properties," says Chin.

A private contractor may be used to fix the buckling sidewalk outside your building, but it's still necessary to get the proper work permits from the permitting office in your borough. Chin suggests contacting the Highway Inspections Office of your particular borough to arrange a dismissal inspection when all repairs have been made, especially if your building or property has been given a notice of violation for a sidewalk problem.

Yes, while we take sidewalks for granted, the city doesn't. They are inspected, and those in poor condition will receive a violation.

"Sidewalk inspections are largely based upon 311 complaints and written correspondence," says Chin. If an inspector finds that one sidewalk section (or "flag") has sunken or popped up, creating a height differential between it and the adjoining flag, a preliminary violation report is prepared, the violation is sketched out and sent to the property owner with a notice of said violation, Chin says.

There is no fine or penalty associated with the violation. However, a copy of the violation is sent to the county clerk and remains on file until the property owner repairs the sidewalk and gets a dismissal inspection, or until the city repairs the sidewalk. The property owner is given 45 days to repair the sidewalk from the date of acceptance via certified mail or posting date after with the city has a right to make the repairs."

Chin explains that the city allocates $20 million annually for sidewalk contracts and assigns contractors to various community boards. The DOT has two contractors in Brooklyn and Queens and one in Manhattan, the Bronx and Staten Island, with a construction season that runs from approximately April to November.

"If a building is a landmark, a permit is needed from the Landmarks Preservation Commission," says Bavaro. "The contractor will need to call the New York CityOne Call Center for an underground utility mark-out as well. Other issues that can be a factor [when doing sidewalk repairs] are basement areas that extend under the sidewalk called vaulted sidewalks, bus stops, mail boxes, subway gratings and tree roots.It's difficultfor the building board or manager to know that the contractor is handling these issues properly—and improperhandling can come back to haunt the building."

Depending on the square footage involved, repairing and replacing sidewalks in New York City can be tricky and costly, says Bavaro. "The range of pricing varies from job to job, but a repairing a typical sidewalk in Manhattan can range from $10 to $30 per square foot and some cases can be as high as $50 per square foot.Vault work involving structural repairsand waterproofing can be in the hundreds of dollars per square foot."

How often will you need to repair a sidewalk? Well, it depends."It really depends on usage and abuse," says Arnie Silverman, president and chairman of the board of Silverman Construction Program Management in Atlanta, Georgia. "The DOT has standards on concrete road replacement.I believe without unusual tree root damage or other unusual circumstances, concrete sidewalks in an urban setting should last 15 years or more."

According to the New York City Tree and Sidewalk Evaluation Program, which sidewalks get fixed depends mostly on the seriousness of the repair. On the website, www.nycgovparks.org, it explains, "A vertical lift elevates the level of sidewalk joints. Sidewalks that are cracked but not raised will rate lower than those that are lifted and present a greater tripping hazard. For example, rises less than one half-inch will rate lower than a rise of more than two inches."

When deciding to repair a sidewalk, it's important to remember that it can be disruptive to both pedestrians and building residents, says Bob Kodner, chief executive officer of The Crack Team, a nationwide network of concrete repair specialists based in Albany. That's why it's vital to assess pavement problems quickly, and act fast to fix them before a minor issue becomes a major liability. Treat the sidewalk the way you would treat other parts of your building—inspect them regularly and keep them in good condition. Your mama's back will thank you.